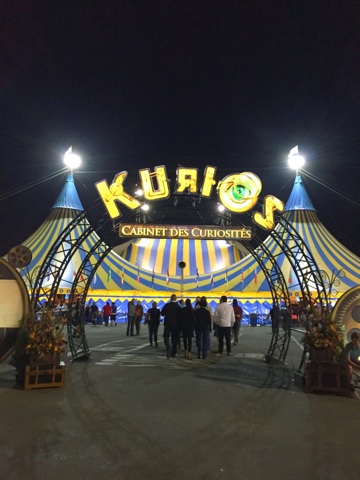 As a child I recall friends always telling me to make a wish when the clock hit certain times of the day. If the clock showed your birthday, (i.e. 2:25) for February 25th, you'd wish for more toys of course! Or, noticing the clock was sequential at 1:23 might mean you would have good luck that day.

What about "11:11"? It is a more popular symbol in the subject of New Age or Numerology. It is at 11:11 when the story of Cirque du Soleil's newest show Kurios begins. 11:11, allegedly a time of perfect synchronicity or heightened awareness can open the mind to what is possible. In Cirque's show it is a signal for a parallel universe to open up and maybe travel through that portal.

Lucky for us, the show is only playing about two miles away from us in Costa Mesa, California. So when we scored our very last minute tickets, it wasn't a hassle at all to get to the tent site. When walking toward the Big Top I get the same feeling as when walking toward a Disney Park castle. It really is an icon to all that see it. The tent reaches toward the night sky while proudly flying the various country flags that represent their performers. I suddenly felt like a kid!

The first time I saw a Cirque show in 1996 I was so impressed with how well they keep the grounds at the Big Top. Take the personal facilities. The restrooms aren't dark, dreary out houses that smell like last year's trash. And, the background music is always a nice touch to create an exciting atmosphere. They have a lovely merchandise and concession tent that housed some great product, themed specifically to the show. No glow sticks or sparkling swords would be found for sale here. 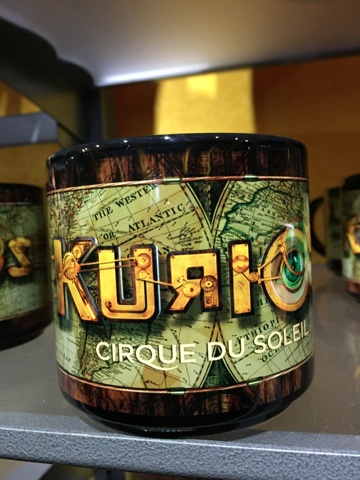 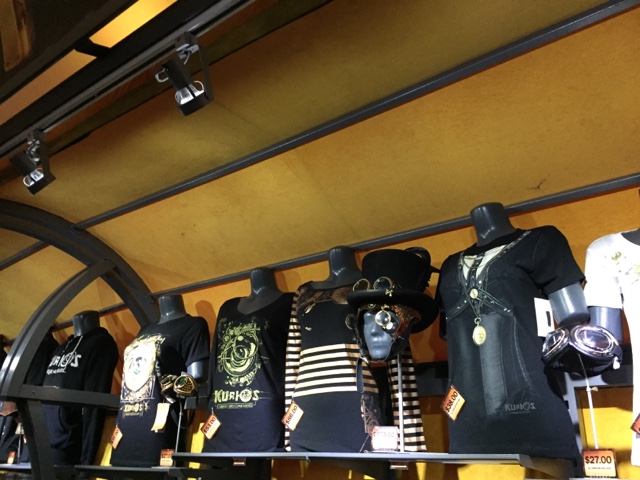 Once inside the main tent, the show's overall tone is set quickly. The stage, full of set pieces that have a Steampunk or Jules Verne theme (there is a bust of him on the stage). Right at the center of the stage is a clock, set on the 11th hour. And, there are three odd looking robots wandering about on the stage. As this is taking place, beneath the large brass gears that connect the stage's machinery to the top of the tent, the large clock changes the time from 11:04 to 11:05.

We found that our 40% off seats did not exactly mirror the map that was shown to us online. We were sat a little more to the side than expected and only one seat was to Eric's left. Still, the stage is a lot closer than one would think. Most of the row ahead of us was empty and even the seats to our right were too. At some point we would move more toward the center, at least after intermission. As the anticipation builds, more spectators enter, and the clock slowly ticks closer to 11:11. 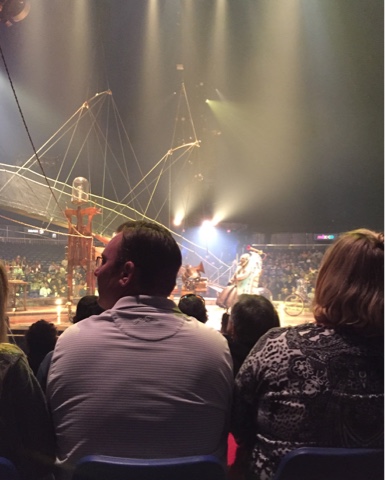 As we waited for the show we noticed the central character, a scientist, begin to move about the stage and make adjustments to his machinery. Eric made an interesting point about the scientist and his robots. One robot was bronze in color, not human in any way, and looked aged. A second had a tad more color, and a little more personality to his mannerisms. A third robot had the characteristics of the second, but also had legs. Eric thinks, and I agree, that the first robot i described was the first he invented. The scientist appeared to have more camaraderie with his first invention, possibly for sentimental reasons.

When the clock did strike 11:11 we could hear a whistle and bells to our immediate left. A miniature train held up by performers made it's tracks directly behind us and continued through the main aisle as it shone it's strong headlight into the tent's darkness. Following the train were the band members playing their drums, violin, and cello. The lead singer was also with them and she  joyfully vocalized with the melody. But, where was the train headed? And, who else was riding aboard this train?

Still in his lab, hanging with his inventions, the protagonist of this story might want to be aboard that train. He didn't have a train, but instead created a machine that could transport him to another realm. The scientist flips his switch and as electrical currents flash throughout the tent, a portal appears up near the tent's roof. Coming down through the portal we see odd looking characters descending into the stage, this "cabinet of curiosities".

In case you haven't seen a show by this company, this is the sort of world Cirque aims to create. Here, maybe they are asking the audience, "Where do you want to go and what do you wish see?" And.....maybe I am completely wrong! This scientist found his solution and they invite us to find ours. The show then becomes a little more abstract as they transition from circus act to clowning, then back to acrobatics.

One of the performances that stood out was an elaborate act of chair balancing. This act began with a dinner party onstage covered in a fancy spread. The characters are communicating in jibberish or "cirquish".  They all stand from their seats during what appears to be an intense conversation. One of the men jumped onto the lavish table. After motioning to his pal to hand him a chair, he begins balancing on it and others at various heights. As he holds impressive poses atop the chairs, we begin to see the exact same scene start to play out above, protruding out of the portal. The difference with this second scene (everyone is wearing the exact same outfit as those below) is that it is upside down, appearing to be a mirror.

The artist up above were attach to well hidden wires that allowed them to stand upside down. Even their clothing had been manufactured so that gravity had no affect on loose articles. It was a very interesting sight to watch as both balancing men mirrored one another. The image was equivalent to tall trees alongside a huge lake while the water reflected back a perfect image. 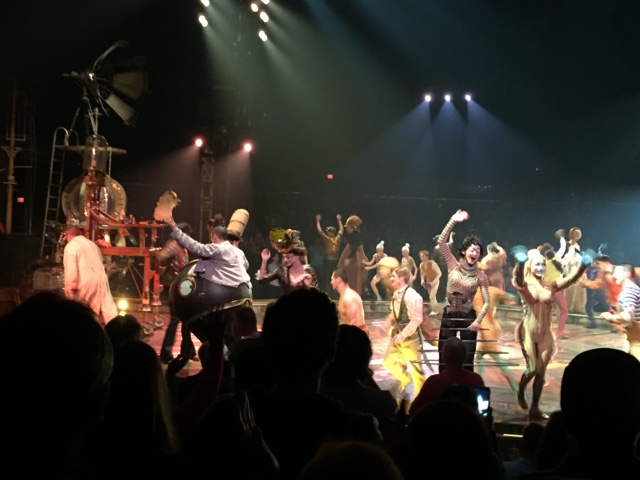 The show's music seems to be a hybrid of Jazz, Rock, and Classical. This show steered clear of the tribal sounding music from recent shows like "Totem" or "Ovo". The choice to stick with this jazzy sound is a breath of fresh air. The company has an excellent range of soundtracks, but when Kurios came along it was clear that a musical change was needed. I like the director's choice to stage the show in such a way that various musicians get to join acrobats on the stage. I don't think I have seen a cello played while being hauled around the Big Top stage and through the audience. The singer, named Eirini Torrneskim, is from Crete. She has a powerful voice that takes the melody to a heightened level. Another positive observance about the music is that I noticed people bobbing their heads and foot tapping to beat. The only other time I saw something like this for a Cirque show was during show "Love" in Las Vegas. At "Love", there was even a drunk women dancing in the aisle, but I digress.

I can't only praise the show. I'm sure those interested want to know what the flaws are. What would I say is flawed about this Steampunk themed show? A theme that felt out of place were the random aquatic characters. Most of the characters had this Victorian/Metallic look about them. Then, you'd have fish show up now and again. The odd costume choice didn't overshadow their incredible talent. And, in sure the creators had their reasons.

Let's talk about the clown in Kurios. This character was quite fun during the show. I usually mentally check out when it comes to clowns. They've never amused me all that much. This clown in Kurios had some fun with his take on the flea circus illusion. That act was brilliant and unique. He later came out and acted as a cat while an audience member awkwardly sat on a sofa next to him. I can't say that I had seen a Cirque clown do that before, but it went on far too long.

Let us rewind back to the show's start, the eccentric characters arrive, but then the scientist disappears. It seemed a little odd that we were following his journey, but it wasn't made clear again until intermission. We see the scientist ascend through the portal and we follow him into the clouds. But, I feel like after that happened he got lost amongst the zany characters we discover. Then, at some point, for some reason, he floats back down through the portal at the show's end. Was he sent back? Did he run out of time? This exit from the magical portal must've been for some reason, but we weren't shown.

Again with the first few show moments, the intro transitions to a juggling act. That stage was crowded with performers. They had purposely staged about eight characters that blocked the juggler as he performed. Eric and I struggled to get a view of the juggler during these moments. Their choreography was a little cute, but we missed out on some cool tricks. (I assume they were cool by the positive audience reaction opposite our side of the stage)

The finale act, although impressive, felt like it was building up to a huge finish that never happened. It was a Banquine act, where performers toss one another through the air so they may land on their partner's shoulders. Talk about strength and trust! It must take a lot of work, tears, years, even blood to get to their level, but it didn't build up to anything. Eric made a good point. A finale act calls for a high energy piece of music as achieved in the Cirque show "La Nouba". The song for this piece is great, as the whole album is, but it didn't convey that "POW! Let's hit them with all we have" energy. When the song did pick up to a driving electric jazz beat, the act stayed at the previous tempo. 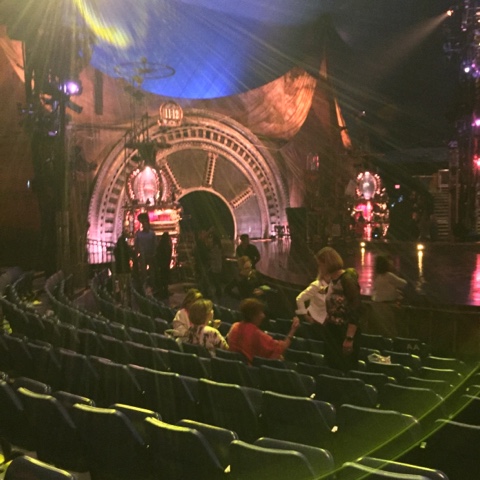 Even though Eric and I noticed room for improvement, the show is very solid. Heck! We are seeing it again in a few weeks! I do not think they need to stop what they are doing and retool all of this. Even if I enjoy something I do like to see what it is that can be re-imagined. I won't blindly accept something as great and ignore minor flaws. 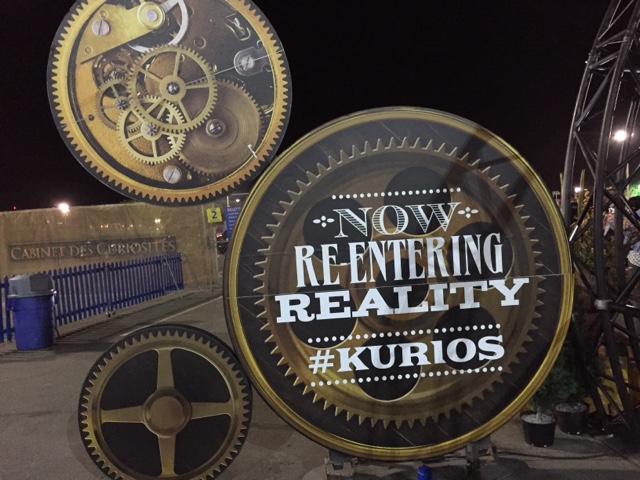 Their tent will call Costa Mesa home for the next few weeks, until November 29th. We obtained tickets through Travel Zoo. I have seen similar deals on the Goldstar app, a favorite of ours. I always tell people to never pay full price for a show or an event. There are some great deals out there if you look hard enough. Eric and I were on the far side of our section, but with that row empty we slid over to seats that were maybe $15-20 more. Because we did move, maybe we saved more than 40 percent? My point is that if you get out and see Kurios, there is no way you won't like it. Great! Now I sound like I turned into a show promoter.

Oh well. I just want everyone to see it for the experience.
Posted by Unknown at 7:29 PM