Who Laid All These Eggs?

Well Spring has taken over the Disneyland Resort. Although we didn't see all on our "To Do" list, Eric and I had a fabulous time. 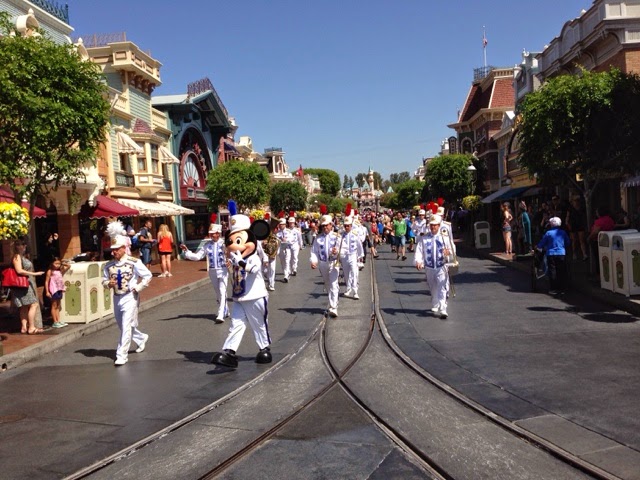 Sure the crowd doesn't look too rowdy, but since we arrived before opening it hadn't filled in just yet. We had our hearts broken at the start because Big Thunder Mountain was delayed to open. Within the first hour we managed to grab a Space Mountain FastPasses and ride Matterhorn. It felt as though that Matterhorn queue did not move. We could've used the Single Rider queue, but we wanted to ride together. If I wanted to ride alone, I'd have gone alone, right? 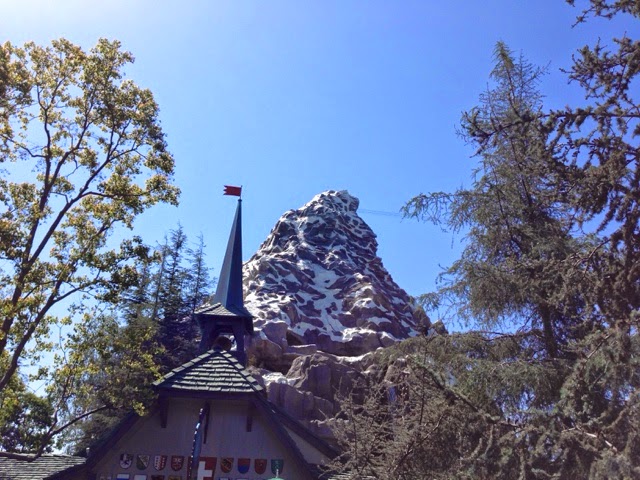 Hearing Eric's laughs and vocal exclamations are what make coasters fun for me. There's the obvious turns and drops, but friends and family enhance the enjoyment. 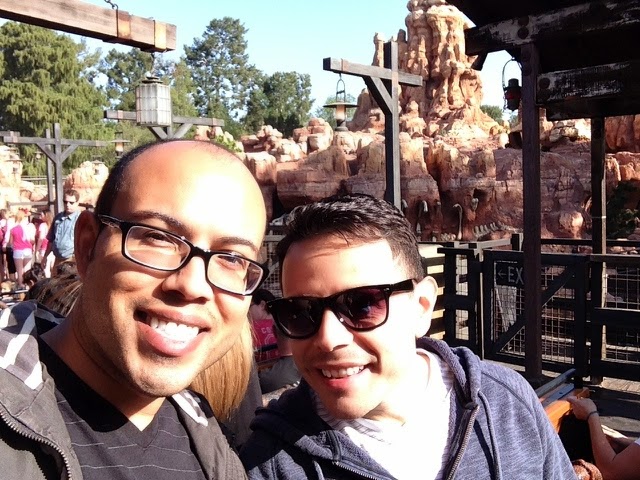 The five minute queue for Big Thunder made up for the time we spent in that Matterhorn queue. It's been said, but this new track gives such a better experience. And, this time we noticed new evacuation walkways. Eric commented that they looked disguised as horse trails. I agree. 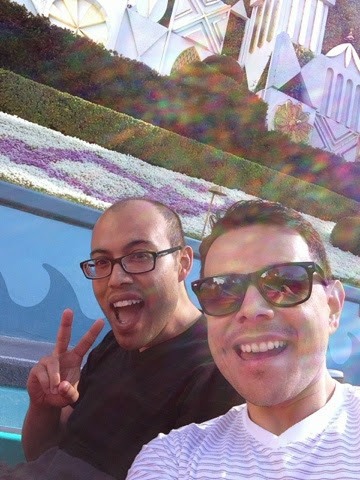 While it's open for a brief two weeks, we just had to hop aboard and sail around the world. Both of us were delighted to see the new water effect for the Taj Mahal'a reflecting pool. After all these years of that pool looking drab, it looks wonderful! (Video link of the new effect I shared on Instagram http://instagram.com/p/mxxcD5yy7O/  ) 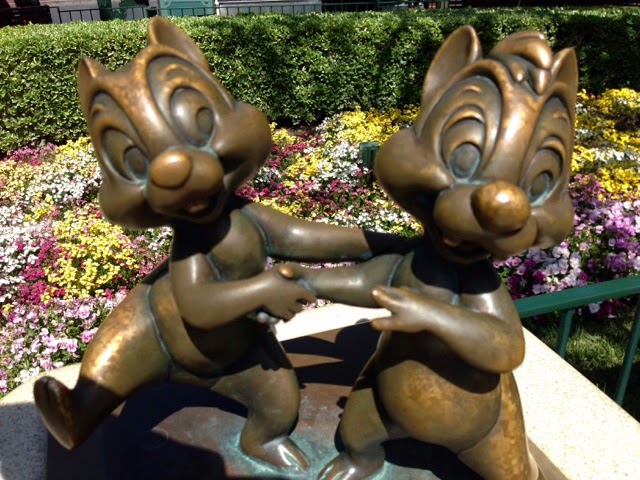 The floral arrangements gave off so many scents that stimulated my brain! A quick breeze would waft the strongest aroma toward us and I felt I stepped into a flower shop. The colors and smells were a grand backdrop of the Disneyland Egg-stravagaza! 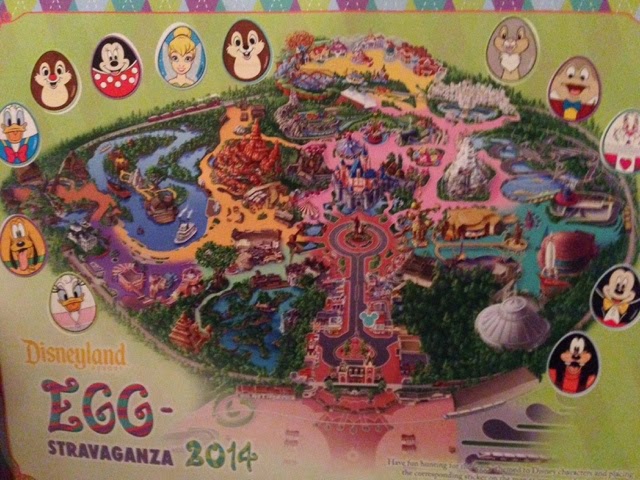 The concept was easy. Find the decorated egg by using the hints (now covered by the corresponding sticker), and cover that space with the sticker that matches. It was even stated we could skip the "hunting" and claim the prize. How boring would that be?!?! 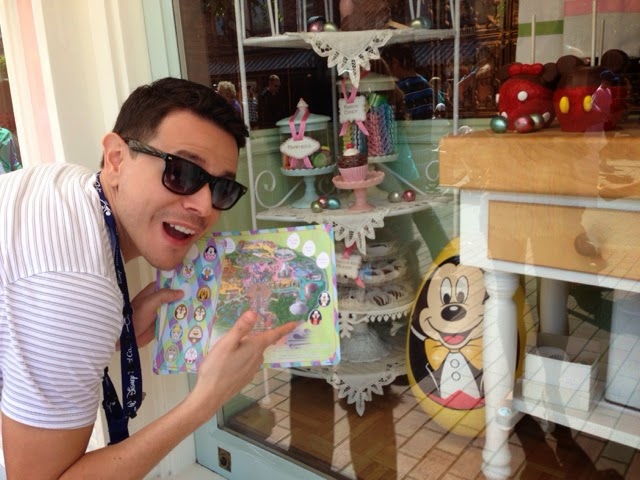 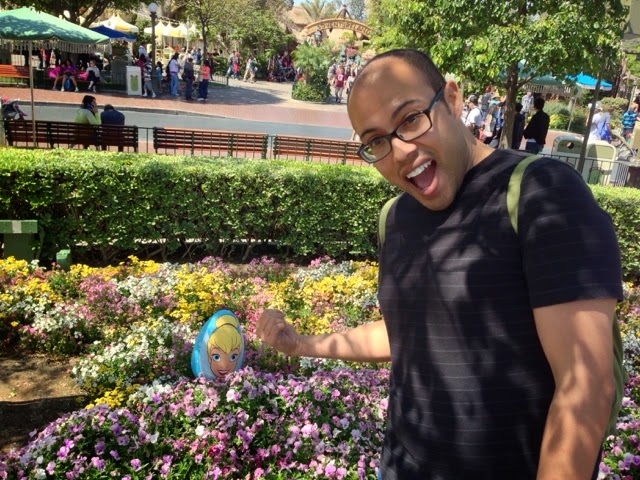 Looking closely, you can spot the eggs we found. They were everywhere, but apparently Spring doesn't exist in Tomorrowland. No eggs in the future. 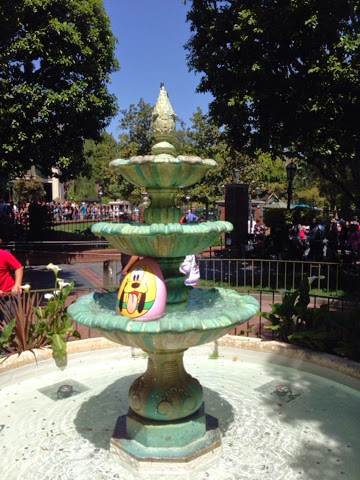 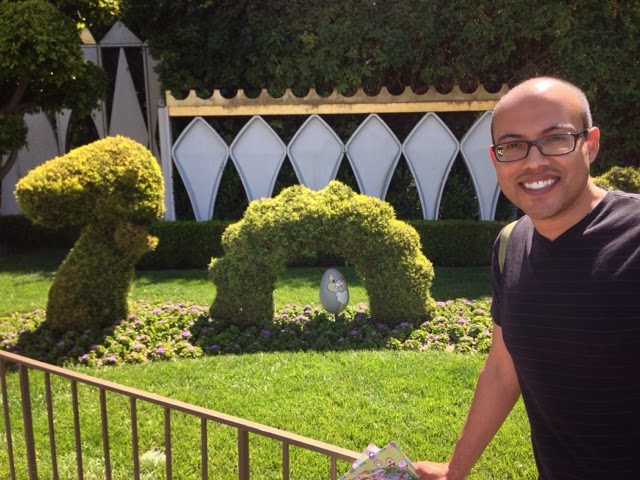 It was around 85 degrees today. Hot!!! So when Eric and I were about 80% through we took a break and watched the show at the Royal Theater in Princess Fantasy Faire. I'm sure it's been reviewed online elsewhere, but I wanted to mention my quick thoughts. It was a cute show with a few good laughs. The tale we were told was Tangled. The guy playing Mother Gothel was so silly and stole the show!

We wrapped up our egg search on Main Street, and turned in our map for official verification. There was a kid ahead of us in the queue that said, "I understand that I don't actually need to do the search. Can I just get the prize?" What a boring kid. Good luck little one!

Taking part in this "hunt" reminded me of the time we looked for the clues at D23, Adventureland Trading Company. I wonder if they're connected at all, put on by the same team?

Here were our prizes. One egg each. Donald for Eric and I had Dale on mine. 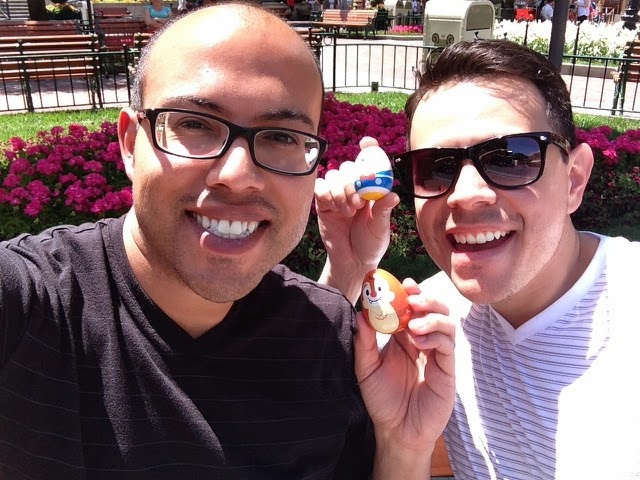 We came across a lot of people participating today. It's good that these little activities come up now and again. I don't think we need the full blown "Sorceror's of the Magic Kingdom", from Disney World. (Not that I've heard any rumors what so ever) I just feel it's good to have these as temporary events to match the season.

Earlier that morning we made reservations for Carnation Cafe. I don't know why I didn't think to take photos there. Maybe my brain was winding down from the heat? The food was good. I had a vegan burger and Eric had a cheeseburger. I definitely would have that dish again.

We were ready to head back indoors, at home. As you can see, Eric was running for the door! 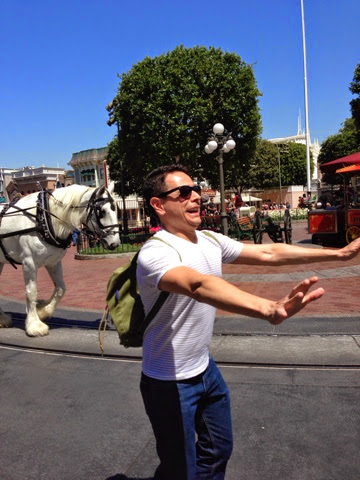 Lay All Your Love on Me!

Yesterday Eric and I were invited to join a few friends watch Mamma Mia. This show has been out for sometime now, but we never took the time to see it. We had several chances, but whether in Vegas or NYC, other shows won top choice. As usual we went through the Goldstar website. This site never disappoints with it's great and accessible ticket prices. I always tell people to never pay full price for any show!
Going into the performance we knew that this would be probably not be the best thing we've seen. Eric and I were ok with that because having seen the film version, we were curious. I do want to note this "review" is more of recounting our experience. This is written merely for fun.
Right at the top of the show, after the short Prolouge rendition of ABBA's "I Have a Dream", the dialogue was over the top corny. I'd go as far to say that it made me borderline uncomfortable. Even the elderly lady right next to me whispered (loudly) to her daughter, "They are acting like 7th graders, not young adults."
Now remember that we knew exactly what to expect. If anything, the overall cliché story and acting is almost the reason to watch this. Then there of course is the ABBA soundtrack. I didn't listen to them growing up, but Eric had a "greatest" hits CD a while back. After hearing that approximately 10 years ago, I developed a taste for them. It's definitely enough of a liking to have seen the film version more than a few times. Off the top of my head, a few favorites of mine are "S.O.S.", "Fernando", and "Voulez-Vous". And, although I don't like the original sung version, Meryl Streep has a notable rendition of "The Winner Takes it All".
This might be because it's just a touring show, many years after the original production, but the music relied very much on a computer/keyboard. That was joined by a guitarist and a percussionist. Being that the music was from the 1970s or early 1980s, I can definitely forgive that. I will say that the accompanying music sounded better than the touring production of CATS. (I won't visit that one in this or any post)
Some of the songs appeared tossed into the set list because a creator really wanted that song(s) in there. We would have a group of cast members delivering dialogue and hear a rim shot from the pit, and suddenly we were thrust into "Knowing Me, Knowing You". That song was a stretch. It seemed the book writers tried to convey a character recalling a past event, but I felt the audience had to piece that together. The lyrics of "Knowing Me, Knowing You" are directed at an individual that wasn't even onstage or in the show. But as I mentioned, one can't put too much thought into this.
At the finale the famous, or not so famous, encore took place. Three songs were sung as the main cast donned some flashy, retro outfits seen onstage at a Bee Gees or an ABBA concert. Eric and I had some fun noting the patrons that were up out of their seat, dancing like they had to let out some tension from work or life. A few individuals were about to jump onstage, it seemed. But, they were all having a good time and I can't complain about that.
Both Eric and I enjoyed ourselves too. I would be lying if I said we weren't smiling for the finale. Mamma Mia was one of those shows to see at least once. Sure it has campiness, but you have to embrace it. The songs are by ABBA! And who doesn't love the song "Dancing Queen"? If you don't, why not? It's all in good fun!
Posted by Unknown at 8:38 AM No comments: