Ever Thought About a RunDisney Event?

Who had the odd ball idea to run two races in one weekend? It was Eric's idea and I said, "Well....alright!" Plus, I didn't want to just be in the cheer section as he ran his 10K. Maybe I was the one out of my mind?

And now, lets check our Runners Roster! Our good friend Ricky would also run both races. Friends and couple, Josh and Daniel would be running their first event! AND! ....so was Tim, Ricky's brother. We couldn't all be crazy, right? 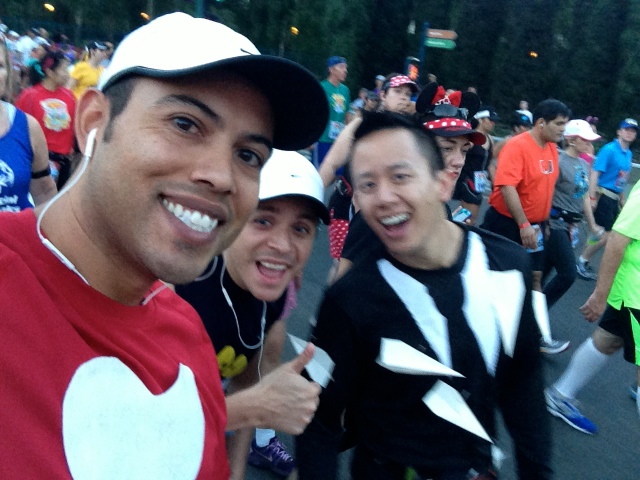 The problem with this event was the heat! If you're reading this and live in the immediate area, you'll know what I mean. Obviously no one can control how hot it gets. What we had to control was our preparation for it and how to keep dehydration at bay.

I was extremely nervous because we trained horribly! So when I say we prepared for the heat/run, I meant we drank our water. 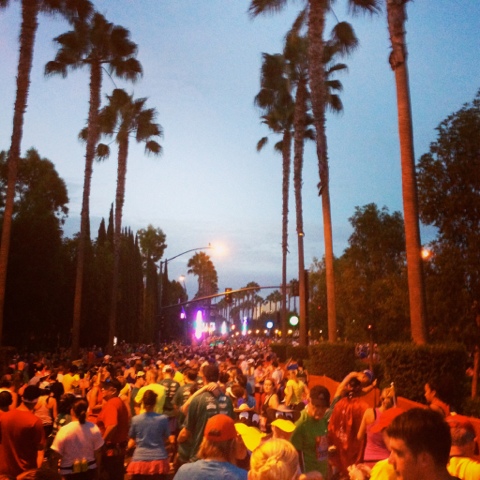 It was just a little crowded. Little did we know that the following day would draw a bigger crowd. (More on that in a bit) 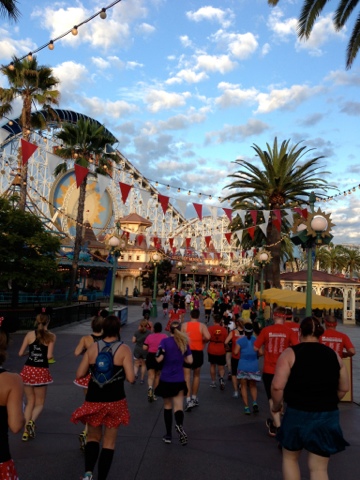 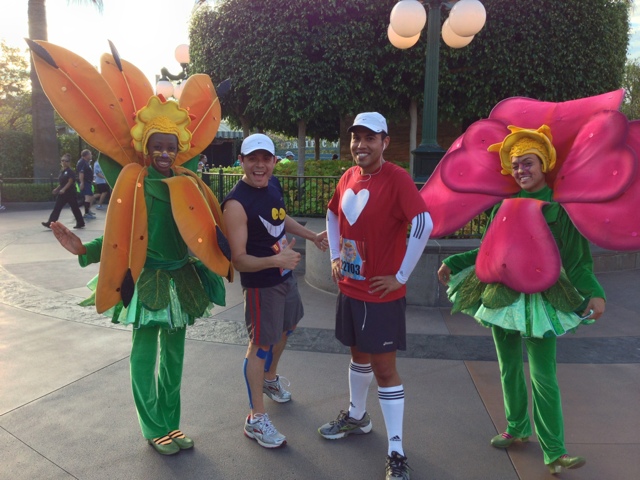 This 10K was themed to Alice in Wonderland. Eric created a Cheshire Cat image he then added to his shirt. And, mine was a "Queen of Hearts Royal Court" theme. (Gotta love a Queen!)

This route was relatively short as it looped around the Anaheim Convention Center and proceeded through California Adventure, Disneyland, and then Downtown Disney. Although short as a whole, the last stretch through Downtown Disney felt so long. The humidity really added to that "We're never gonna finish" feeling. 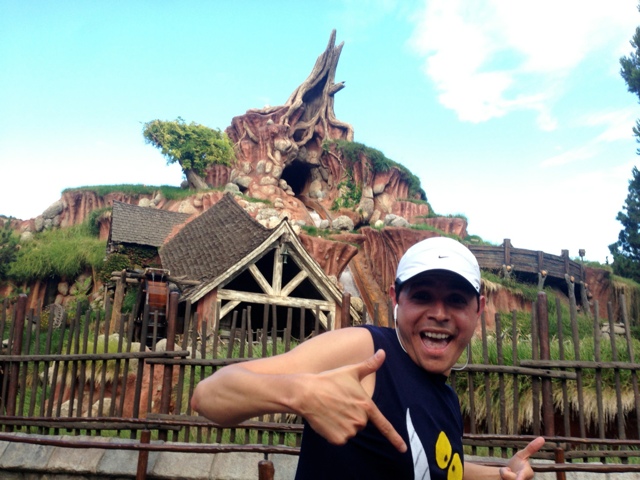 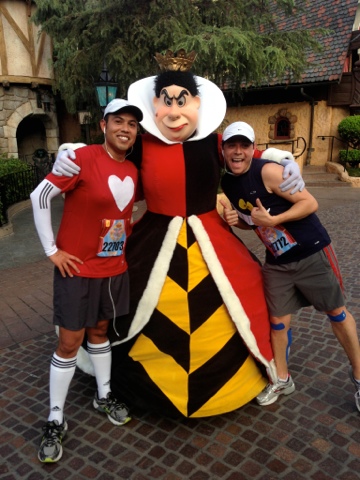 One we started to round ESPN zone I started bounding for the finish line. Eric was right next to me and we were determined to put this sticky race behind us. For the 10K, we both finished at 1 hour and 17 minutes.

We were satisfied with our time and glad we didn't have to run in that weather any further. Here we all are with our shiny, Alice themed, 10K medals! 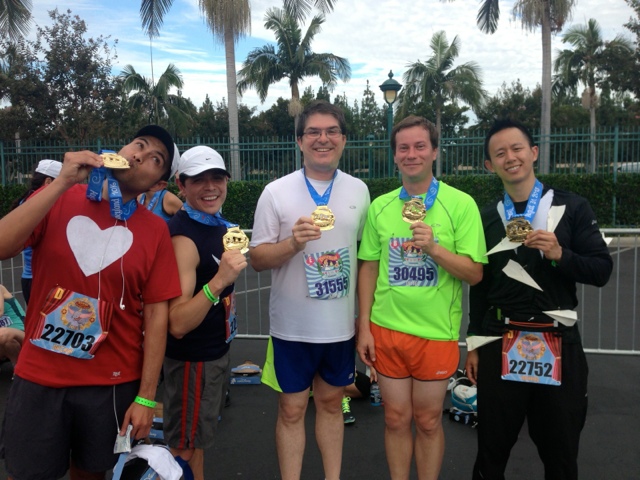 After the event, Eric and I were determined to not be in pain the next day. We spent some time in the pool and steam room. We also spent about an hour using the P90X Stretch program. I think that definitely helped us because I wasn't sore the next morning.

Day 2 began with another early rise at 3:15 AM. Sadly that's when we usually wake for work so it wasn't bad. As we ate our blueberry muffin we psyched ourselves out for the 13.1 mile run. I usually have issues with my calves and ankles. That was at the forefront of my thoughts. 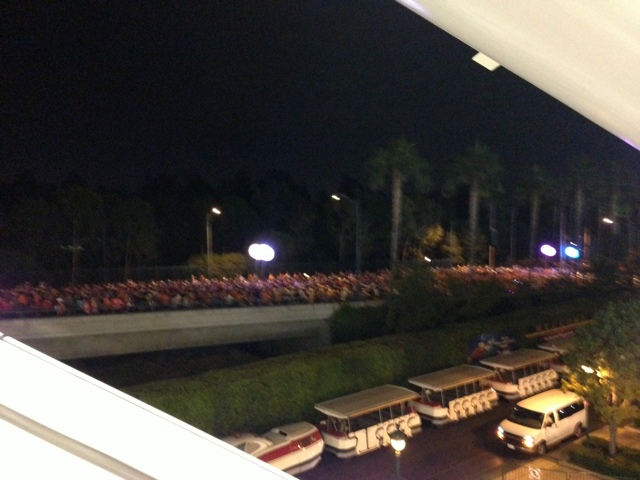 The participants came out by the thousands! We hadn't seen such a huge turnout until this year. There wasn't even room in our assigned area, Corral D. Eric and I had to jump a barrier to enter Corral E. You have to understand that me jumping a fence is a big deal. 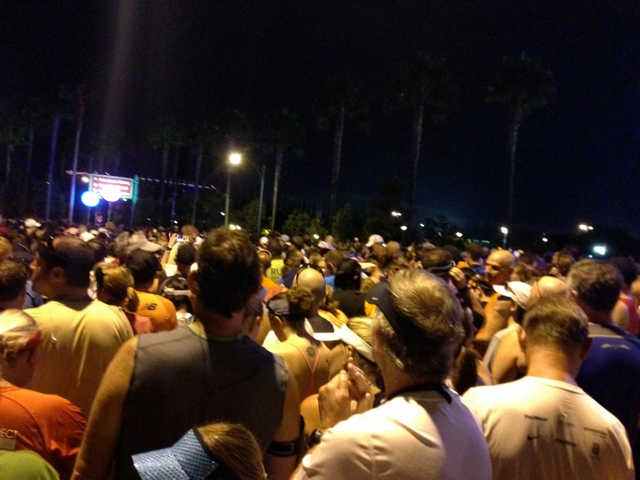 Once the race started, they threw us right into an incline, so mean! But, we had run this before and knew what was coming. This route had us run through the parks and then head East, toward Angel Stadium. The area between the stadium and the resort is pretty dull with a view of only tile warehouses. 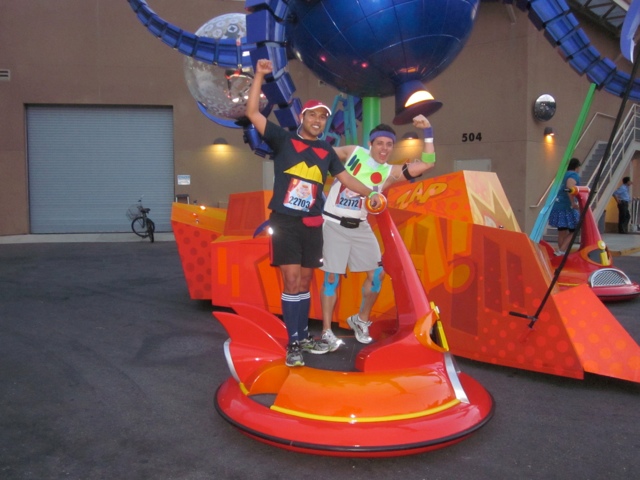 Eric and ignored the event's Dumbo theme and decided to dress as Buzz and Zurg. Yes they are rivals, but we thought it was a fun idea. (Thanks to our craftiness, we put these together). Ricky, his brother Tim, and their cousins put their outfits together as well! 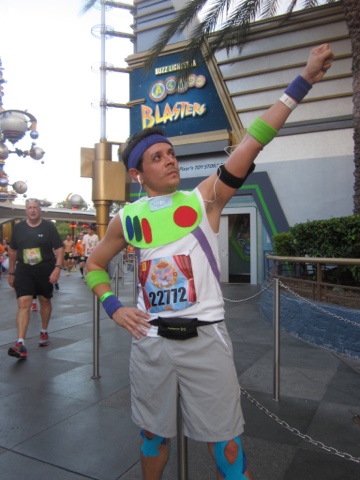 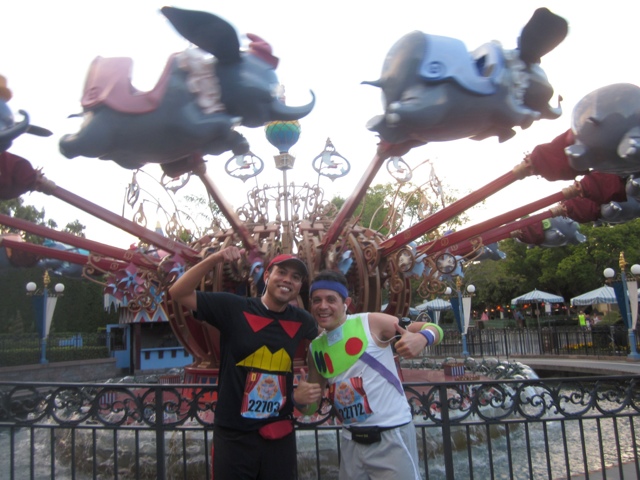 We absolutely had to pose with icons of the race's theme and our costume themes :-)

Once we made it to the route between the parks and the stadium, we had to maintain a steady pace and stay injury free. Heading toward the stadium too quickly can really count against you while heading back toward the resort.

At one point the route runs beside the river and that portion was so long. This area was in fact drawn out because the event planners had to avoid construction. It certainly felt longer! 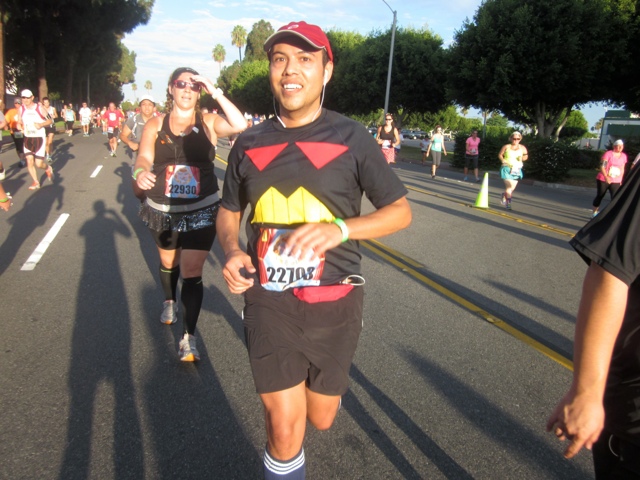 While we were to enter the stadium, we received an extra boost of encouragement from our pal Josh! He was cheering us along. Josh snapped a photo of me sucking on a Cliff Bar Energy Shot, not flattering, but it was a "must do"! 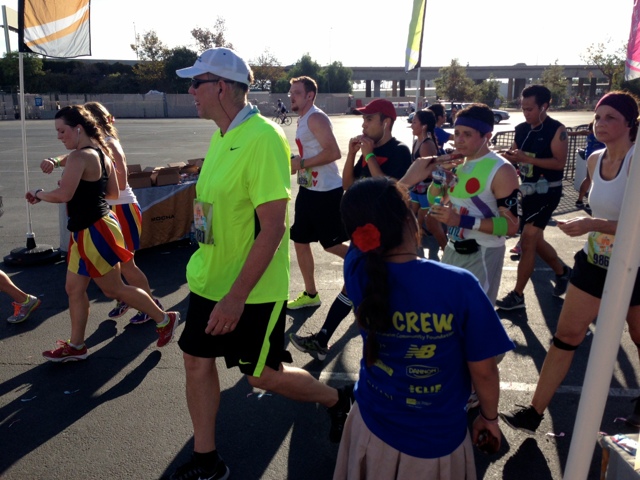 Once in the stadium and the announcements are sounding off (couldn't understand a lick of it), the excitement grew! 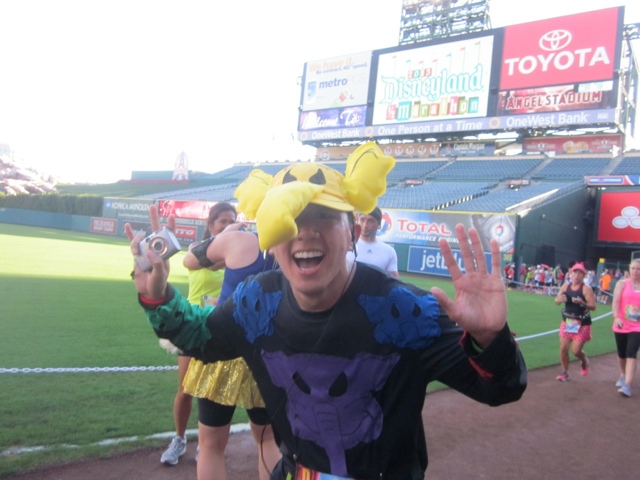 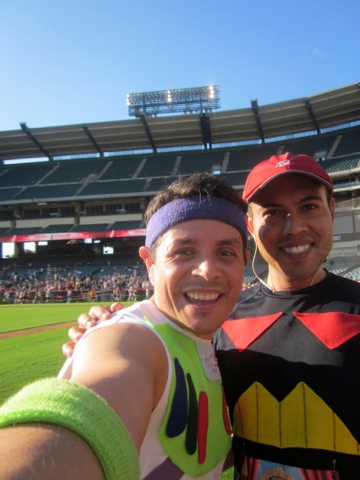 One can see our professional craftsmanship on our costumes here.

The route heading back to Disneyland was as tough as expected. There was an entire mile we walked. Around mile 10/10.5 is when my calves usually start to contract into cramps. It seemed I was keeping that issue at bay, but it didn't last long. 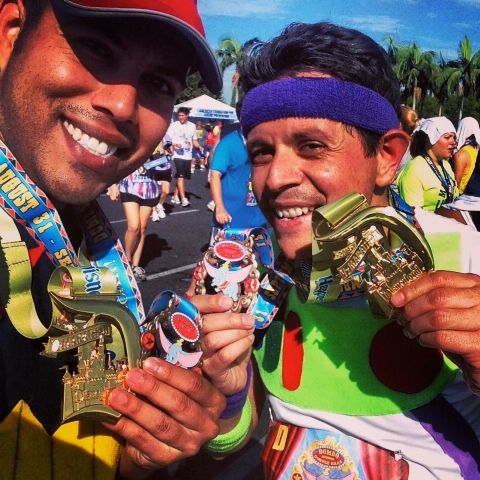 Here are our earned medals! We received one for the previous day, one for the 13.1 miles, and a third symbolizing the entire weekend event. Three! The feeling of accomplishment made the pain all worth the effort. Our final time for the 13.1 miles was 2 hours and 50 minutes. That time was about 20 minutes slower than our best recorded time, but that's ok. It was done! 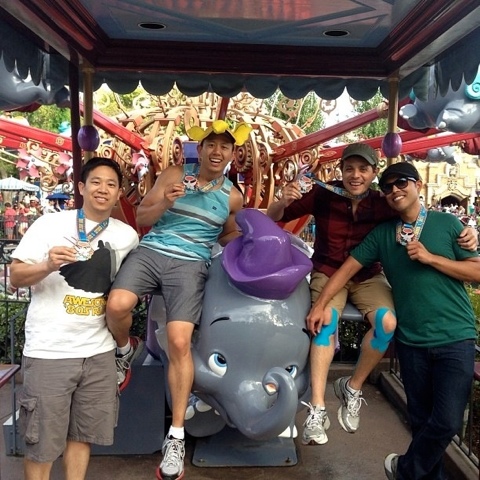 Eric and I have our next Run Disney event this coming January, The Tinkerbell Half. We've kept up our running since this event, but we must stay focused and keep running!

Posted by Unknown at 7:28 AM No comments: