We haven't brought Eric's dad to the parks in a long time. I don't think he even knew about Cars Land! We are on our way to let him experience for himself. It's quite a lot for him to take in, but it's a decent crowd to deal with. It seems the winter tourist season is upon us as the walkways are manageable and even the Toy Story queue was ONLY 20 minutes! Since Midway Mania is the "Peter Pan's Flight" of CA Adventure, it was surprising to have a short wait. As usual, Eric blew us out of the water with his 245,000 score! I had a score of 175,000, a cat for a prize.
We even waited five minutes or one cycle to ride Luigi's Flying Tires. Don't believe me? Check out the photo of the queue! :-) 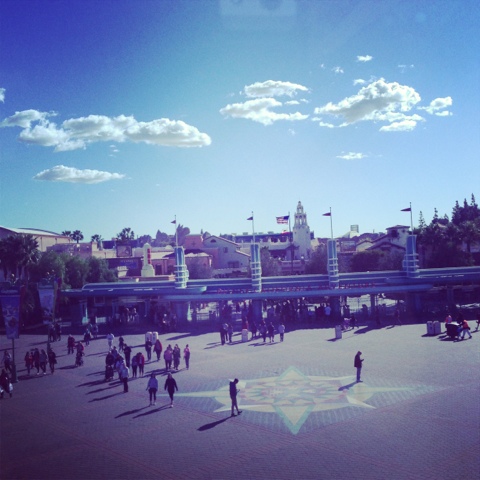 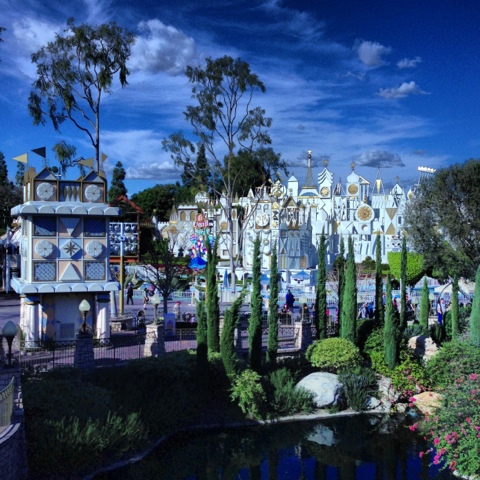 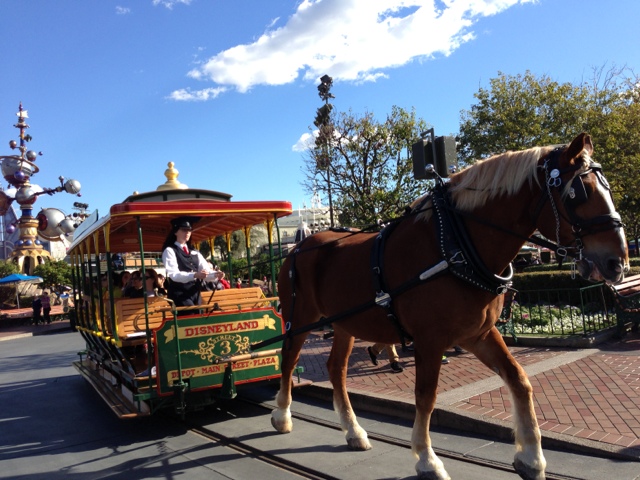 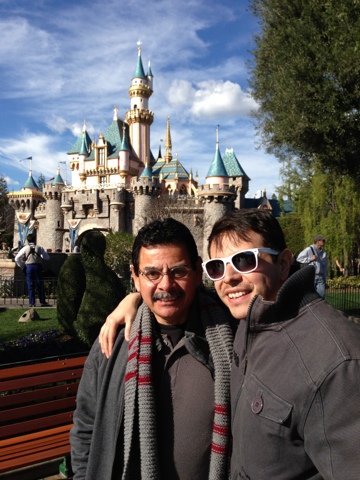 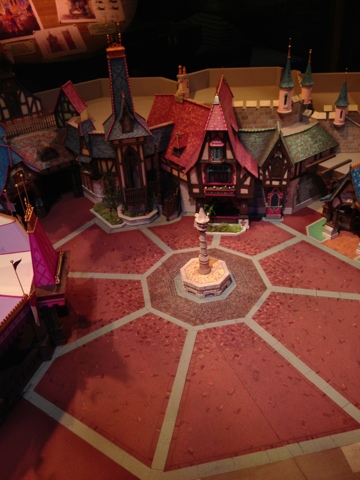 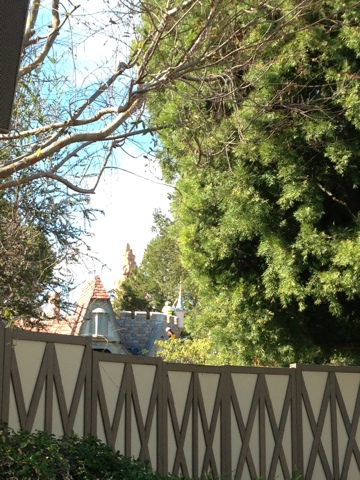 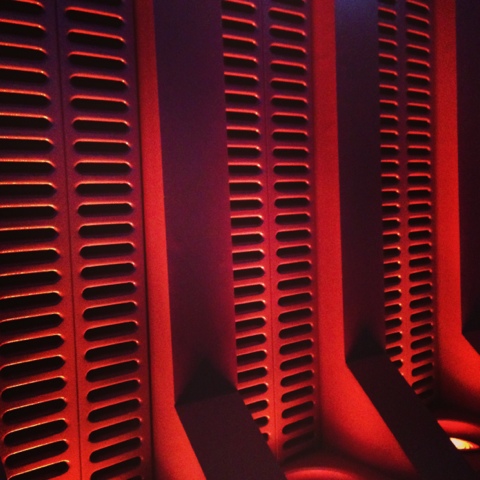 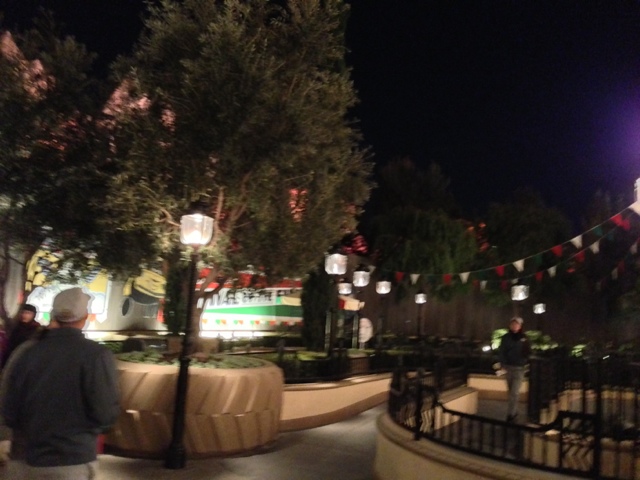 Posted by Unknown at 5:49 PM No comments:

We decided to visit for the first half of the day. Sounds like we are heading to Downtown Disney in a bit.
There's a bigger crowd today than our last trip two weeks ago. I have to mention its a great deal warmer too! We have such odd but amazing weather in California.
I'm using the Blogger app today for the first time. I'm not sure I'm even using this correctly. 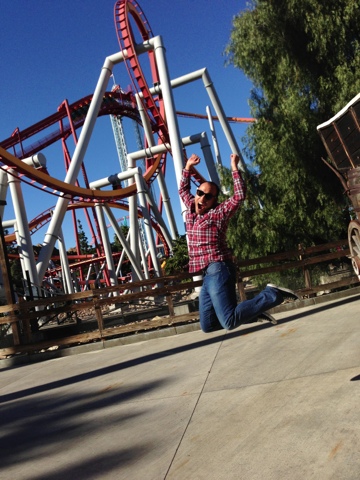 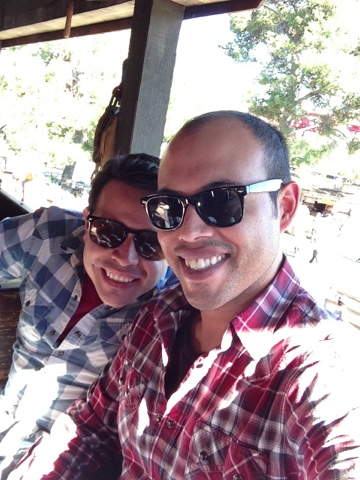 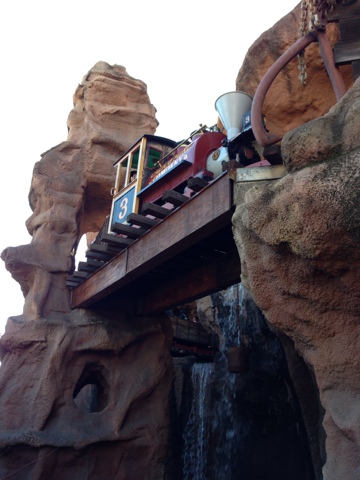 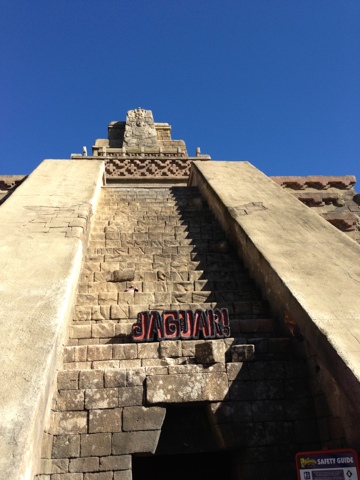 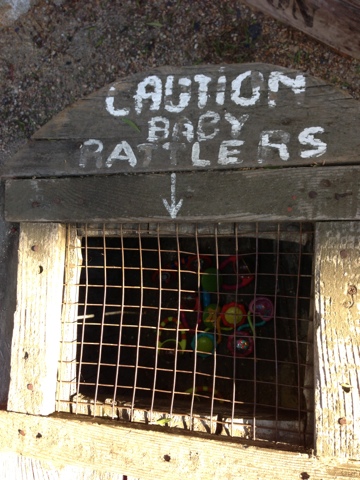 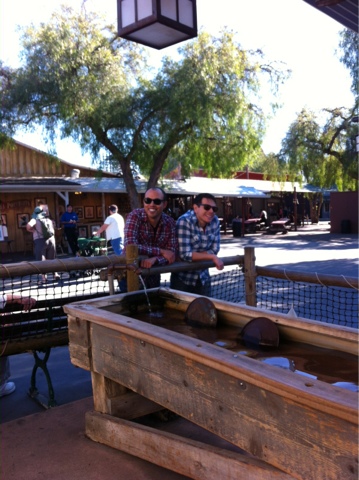 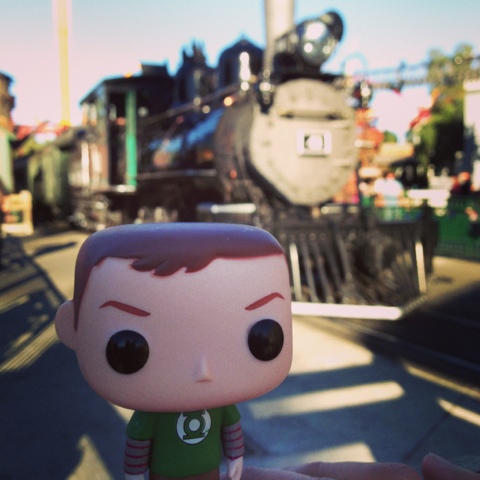 Posted by Unknown at 3:01 PM No comments:

More shows than one can handle at Knott's MERRY Farm 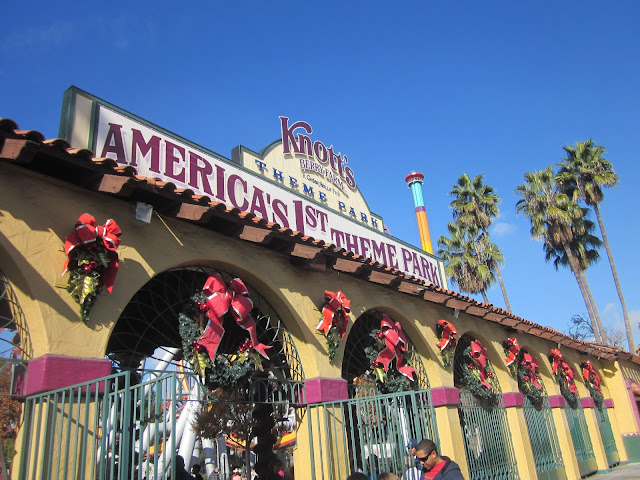 After many years together, Eric and I finally became pass holders to Knott's Berry Farm. We hadn't been to "America's 1st Theme Park" since holiday time of 2010. Although there wasn't really anything added recently to the park, we found new experiences for ourselves.

We popped into to the Passholder Center and turnstiles about 30 minutes after the park opened. When they call something a "ghost town", an early arrival shows they really mean it. As we went through the western town we found ourselves alone on the streets. But, we weren't going to argue one bit. We were able to point out small items we missed last time (the Craft Fair clogged the streets). The area was so free of movement that we even noticed two rocking chairs being used by a ghost. There they were on the balcony, rocking on their own accord. It was a nice and subtle touch. 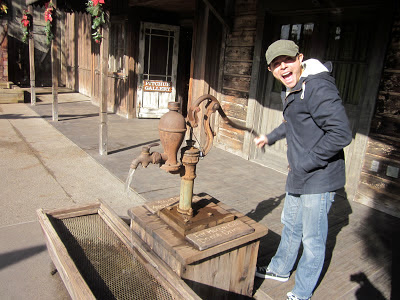 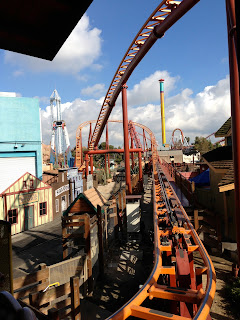 Eric and I were now ready to be told an old story from a native Pacific Northwestern dweller. Knott's Mystery Lodge features a storyteller that takes the audience on a journey through his life and demonstrates Man's connection to the Earth. Through the use of in theater "smoke and fire" effects, the tale is enhanced and illustrated. There are even a few moments when the narrator vanishes and reappears elsewhere in the theater. The show is done very well and only had a handful of performances take place a day. For anyone heading to Knott's, I would highly suggest you take time to enjoy a seat and a good story.

We heard that to get deeper into the wild west we had to take a stage coach. Well Knott's did a great job hiding the Stage Coach barn area so I had to ask a few Cowboys if they knew where we could find it. I thought he was lying, but he said I'd have to ride a bullet to get a better view of the land. Then, the cowboy that said from there we'd find the horses and coaches. 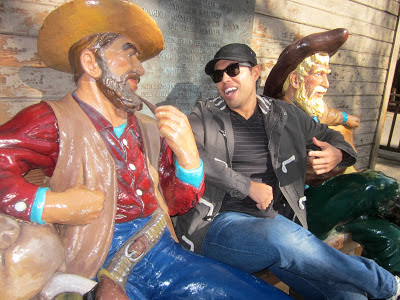 I should have believed him because Eric and I found ourselves boarding the Silver Bullet coaster. That suspended coaster flipped us every which way physics found possible! At some point time seemed to slow and we felt ourselves floating while the harness spun around us! Through this fun madness we saw the Stage Coach! We found our way and were ready to head deeper into the Wild West. 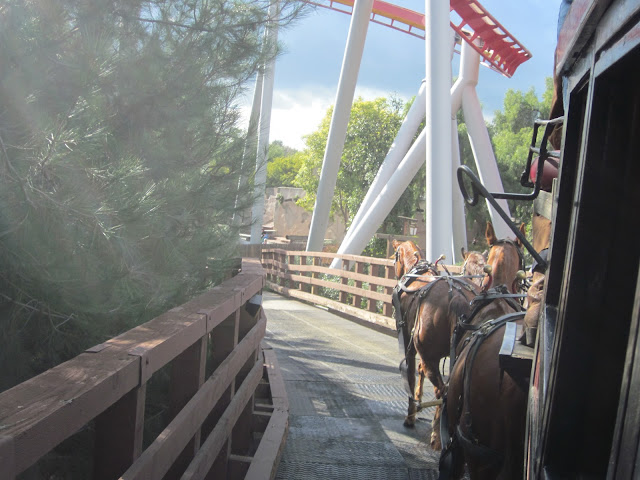 That coach dropped us off in an even colder environment than before. We needed coffee or hot chocolate fast! Luckily past a few saloons, and the haunted mine shaft of GhostRider, we got our hands on something warm, coffee. And as we sipped our coffee, in the shade, we watched people scream their silly heads on the nearby coaster. (not sure why we avoided the table in the warm sun)

Alas it was time for the big show of the day "It's Christmas, Snoopy!" We didn't have Dr. Who's Police Box to travel through time, so we just had to walk very fast to a 1920s style boardwalk. It was there, next to the dearly departed Kingdom of the Dinosaurs, that we found the Charles Shulz Theater. 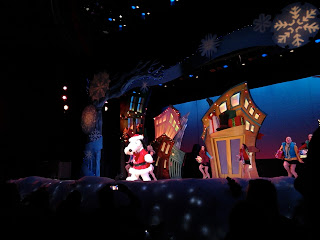 Once the house lights went down the show jumped right into the ice skating. We had seen this show two years ago and it was the same show. I was hoping for this because the skating is great and so are the interludes between the big numbers. The Peanuts gang (Charlie Brown, Lucy, Linus, and Sally) put on a skit while the rest of the troupe changes. As one might guess, the story follows the Charlie Brown TV special from the 1960s.

There was a woman or man in the audience that screamed out as the performers leapt across the stage. I found myself waiting to hear the "Aaaah!" whenever a performer completed a triple or double axle. 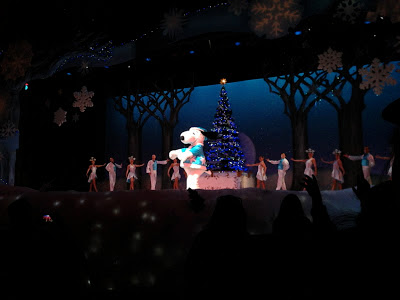 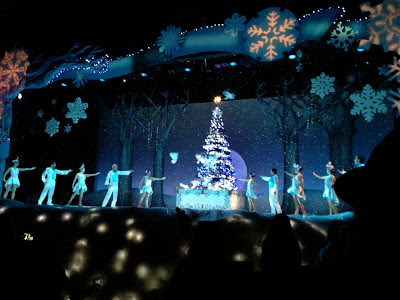 For those who don't know, the Log Ride is shutting down soon for a lengthy rehab. I don't know the specifics, but the point is we rode it. For Christmas time the attraction has been invaded by elves. 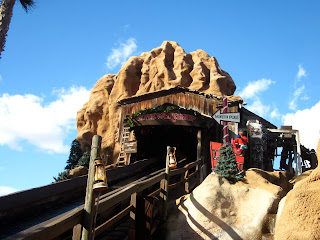 The mountain is certainly showing its age and is crying for help. We heard this crying as we approached the queue. As it turns out, it was the sound of the small elf that was standing next to the North Pole signage. Eric and I were hoping we wouldn't get too wet while riding. As I mentioned earlier, it was a cold day running at about 55 degrees.

As with most attractions this day, the queue was next to non-existant. We might have waited about 5 minutes. I'm guessing that the draw on this cold day was the the Christmas theme and the soon closure. When we rode Boomerang, a far more thrilling coaster you ride forward and backwards, there was absolutely no wait.

After the Log Ride we found ourselves back in the Ghost Town. Aside from attractions mentioned earlier, this land is also home to The Bird Cage Theater . Eric and I planned to catch the performance of "The Gift of the Magi". To our surprise the theater had a building's facade, but it's actually made of a tent. We had hoped for something with a little more embellishments. Luckily the structure didn't take away from the actors' performance. They presented a story of a couple's struggle to give one another a Christmas gift. The same theater puts on A Christmas Carol. We will need to see that next year.

It was nearing 4:15 and the sun was starting to hide behind the haunted buildings of the Ghost Town. To warm up for the parade, we headed back to the coffee shop. But, on our way back toward the parade route we stumbled across a Native American Indian performing. He was chanting, playing instruments, and dancing with hoops. We hadn't expected to see this today, but we were glad to have passed by. 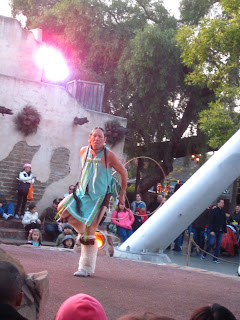 It was now parade time. Knott's had people in bright, red jackets lined up the parade route. We guessed no one wanted to put up ropes or drill any holes for poles. I wasn't expecting really anything for this parade. I was told it was four floats and had off-beat dancers. As they were younger, the performers seemed to be from a local dance/school group. They stayed "in-time" better than expected. The floats five or six were just ok, but still cute. 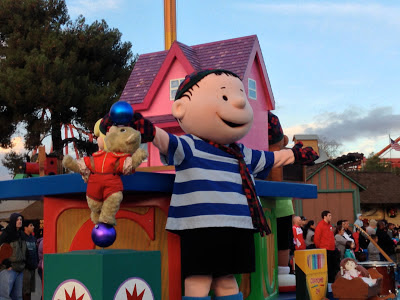 Now we were getting even more cold and planned to leave. We headed back through the Old West area and passed the Calico Saloon. Well, the saloon show was about to begin and before I asked Eric if he wanted to watch, he was halfway up the stairs. If I haven't already mentioned it, the entertainment at the park is generally done well. At this saloon show, the singers were professional, engaged the audience and were quite funny. It was clean, silly, American old west humor.


So as our day drew to a close we took a short stroll through Camp Snoopy. The area was lit up for the holiday one last time. It was the final day of Knott's MERRY Farm, until next year. As Eric and I wandered the camp, posting to Instagram, our numb fingers could barely type up our posts. As the park's crowd thinned out again, but never got busy in the first place, we were ready to go somewhere warm. Eric and I took in a lot of Knott's entertainment that day. We definitely accomplished the goal for our day. 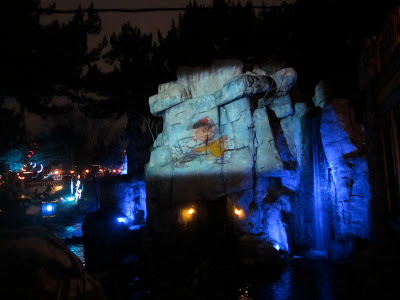 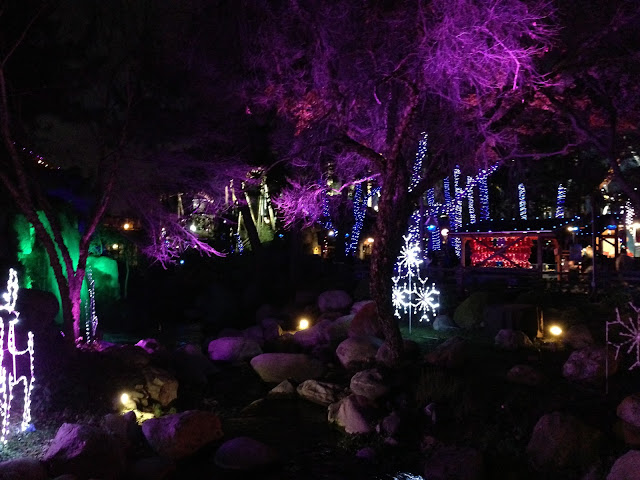 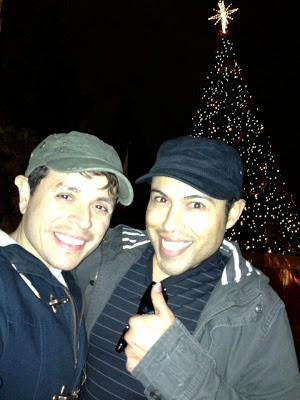 Posted by Unknown at 5:34 PM No comments: