A Honeymoon Dinner to Never Forget 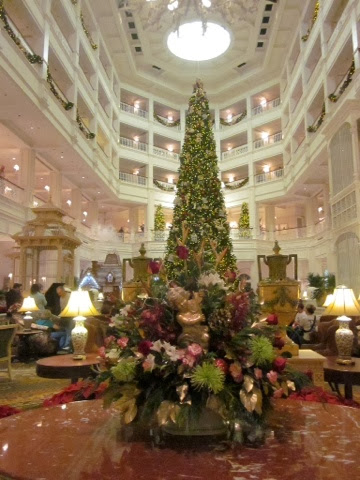 Never before had Eric and I brought a suit along, but as you all know this was a special trip. This time around we would dine at Victoria and Albert's, located at Disney's Grand Floridian hotel. I will admit I felt business-like when we boarded the airplane with our garment bags.
The day of our meal we decided to visit Animal Kingdom. The park was shutting down at 5 PM, so we knew we wouldn't be missing out on any park hours. 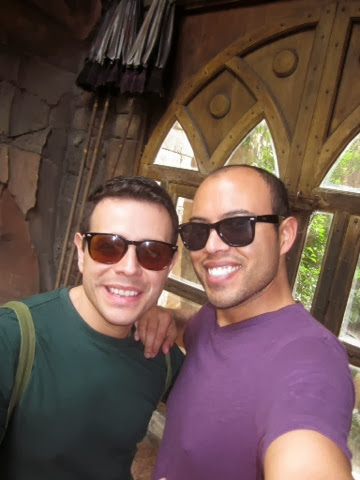 We did have a good time at the park, as we always do, but getting ready for our posh dinner was also fun. A lot of people deny it, but I enjoy getting dressed up to go out for a nice dinner date. As we made our way through the lobby to catch a taxi, we noticed we were the only two in suits. Our hotel was nice, and not to mention a deluxe hotel, but it was a casual sight in the lobby. Where were all the other guests about to hit the town?
To our satisfaction, once we arrived at the Grand Floridian hotel, the tone was very different. We had been there before, but it was slightly more beautiful than we had remembered. As soon as we walked into the doors the scent of gingerbread and cinnamon took over our senses. 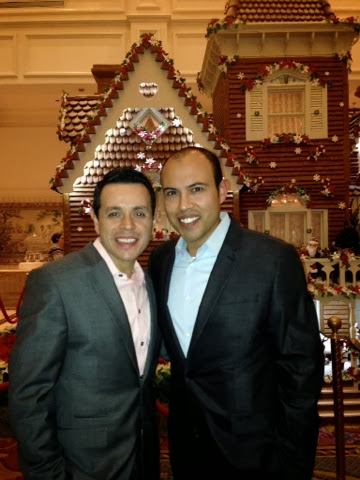 We immediately began snapping photos of the hotel's enormous interior decor. Eric and I were so excited! If this had been a musical I am quite sure we would've broken out in song! Entering this hotel was like meeting all the Downton Abbey cast in the library, just before dinner. If you don't get that reference then you need to get on with watching Downton Abbey!
There were families and couples all over the lobby area. Everyone was dressed in great clothes and ready to enjoy his evening. Classy looking people sat in the upstairs bar, drinking up Gimlets and Martinis. The backdrop to all of this was elaborate Christmas decorations with two fantastic center pieces, the real gingerbread house and Christmas tree. The gingerbread house doubled as a dessert shop and had a smoking chimney. 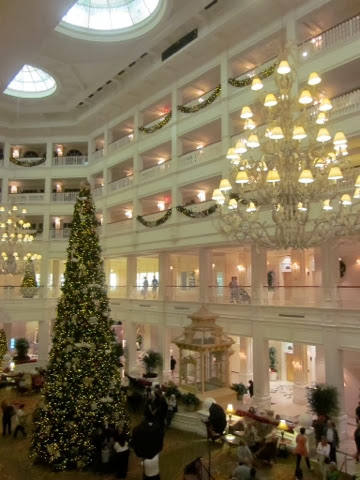 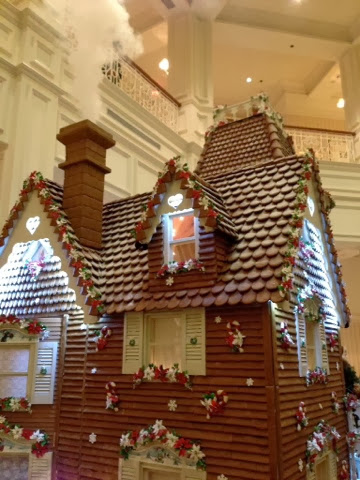 After taking in the setting of the hotel, we found our stomachs to be very empty. It was near 9 PM. Our reservations were so late because the restaurant doesn't open until 7 PM and they only have approximately 14 tables. The intent is to have a very service focused and intimate experience. I don't think either Eric or myself really knew what to expect. I still hadn't seen any photos of the place. The nicest place we had recently eaten at was Napa Rose, located at Disney's Grand Californian. But, even that place didn't require the men to wear a jacket or blazer. 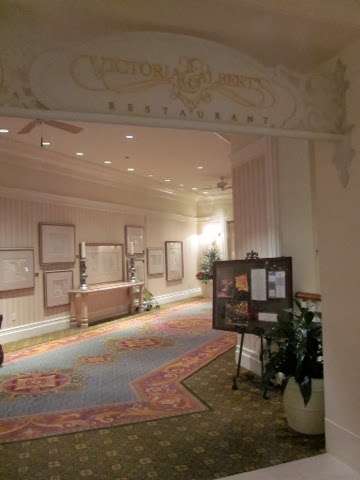 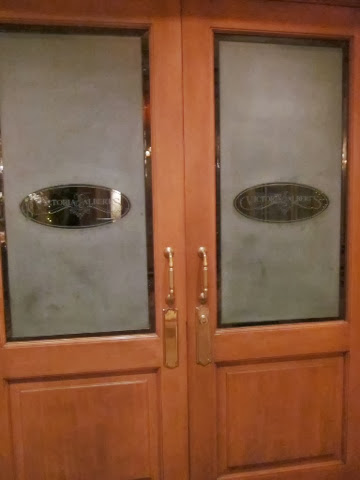 As soon as we opened the door we were kindly greeted by the maître d. He looked us right in the eye, used our first names in his welcome, and congratulated us on our marriage. The reservation included our information and what were celebrating, but it was still nice that he knew exactly who we were. I am a little embarrassed to say that I don't recall his name. 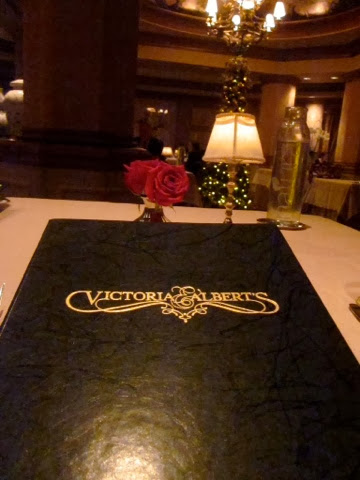 We were sat near the harpist. She was playing music of the Christmas season. Most of the music was so elegantly played, at not so usual tempos, that it would take a bit to figure out the tune. The style was very impressive. I'm going to blame the lighting for this one, I'm looking tired with the dark shadows under my eyes, but the harpist can be seen behind me. (I really wasn't tired) 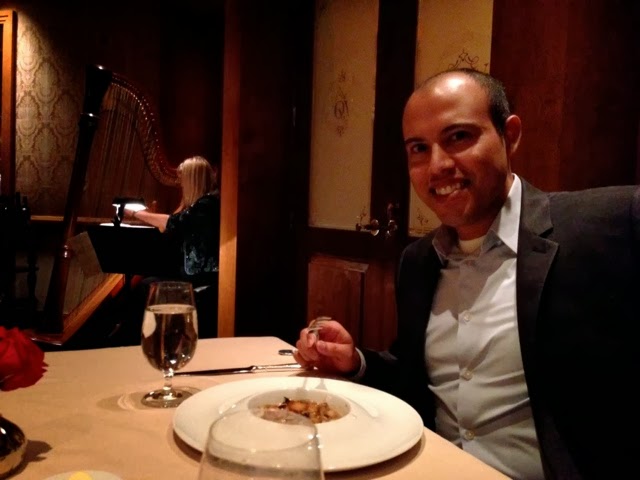 Both our servers introduced themselves. There was a younger, quieter one named Aaron and the slightly older guy was Don. Both of them had a very calm demeanor about them. Neither of them were there to infiltrate our space with the "loud Disney pep" persona. Their personalities matched the ambience very well.
We were presented with our menus, that had been tailored to our tastes. A week earlier Eric received a call from Disney Dining. He along with the caller created our menu options. They asked questions about whether seafood was ok or if there was anything we absolutely didn't care to eat. My main concern was to have a vegetarian menu. There weren't a large amount of vegetarian selections, but I was willing to try what they had laid out. Being a meat eater, Eric had a lot more to choose from. The top of the menu was personalized for our occasion. 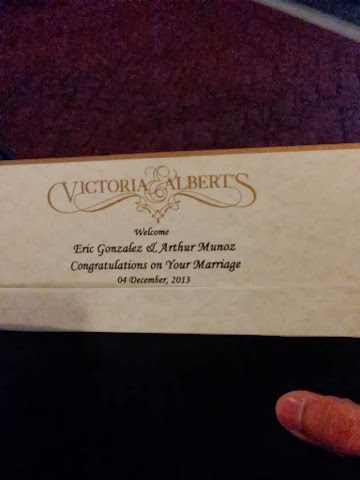 As each dish was brought out to us, the servers explained what the ingredients were and its origins. In some cases we were told the location Eric's duck or beef was flown from. This was my first time dining at a place that went into detail like that. I felt like a nerd because I thought to myself "Hey! It's like the cooking competitions on TV where the chefs describe their dish to the judges!" 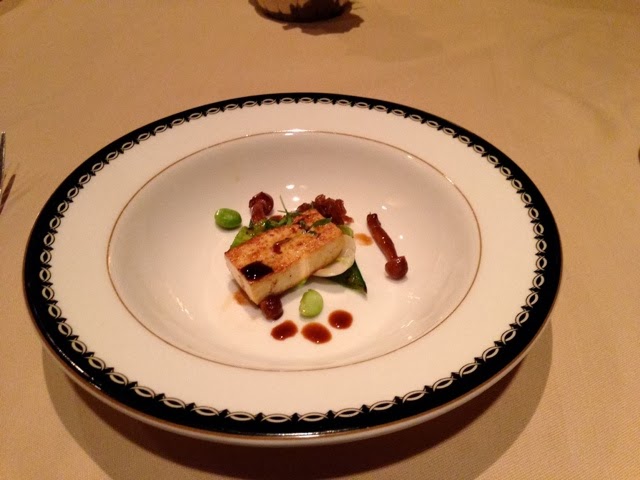 This was the first dish or appetizer that was brought out for me. I won't go into all the details of what each dish was, that would be too long. We had seven courses. But, I can say this was tofu with a small amount of veggies. The sauce also had great flavor. 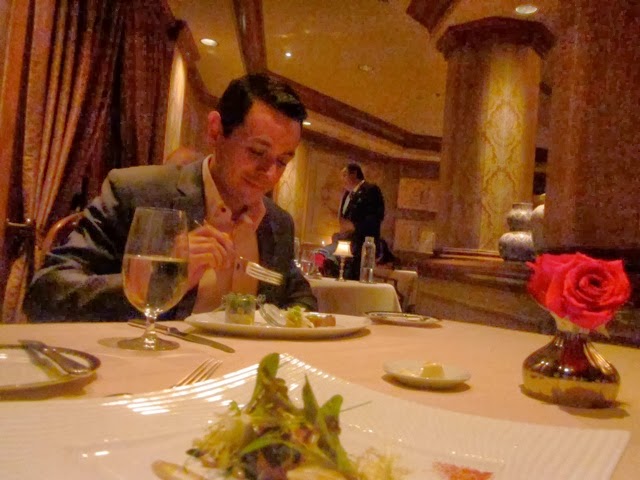 Eric even had some food items he had never eaten or usually avoids. He does not like apples at all. But, he did have a dish of pheasant that had a small portion of Apple slices. He ate them! I should mention that it was also at Disney World where Eric decided he would finally try a salad, in 2008. But, I digress. 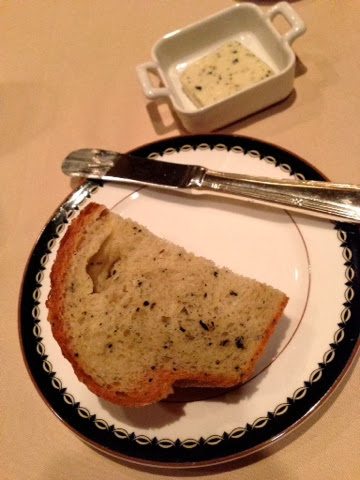 We had three bread courses. These various breads were so good. This one pictured above was bread that had truffles in it. It was my first experience with truffles and it was worth the wait. I can only say it was an explosion of flavor! The blue cheese spread is literally listed as the BEST of its kind, in the world. Don, the server, mentioned the exact award but I can't recall the title at the moment. 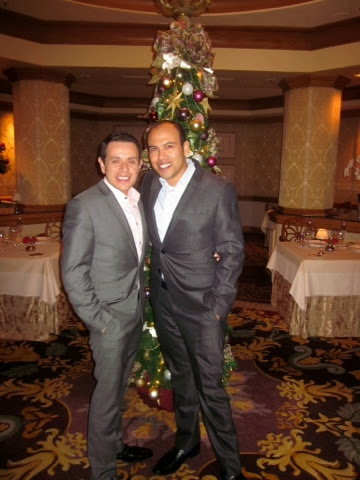 We were there quite late. I think we were on our fifth course around 11:30 PM. We didn't feel rushed at all. They left approximately ten minutes between taking away your plate to bringing a new one. As I mentioned before, our server Don was very talkative. We learned a little about his time with the company and that he has been with his husband for around 20 years (I forget the exact amount of time). He was a very cool guy. 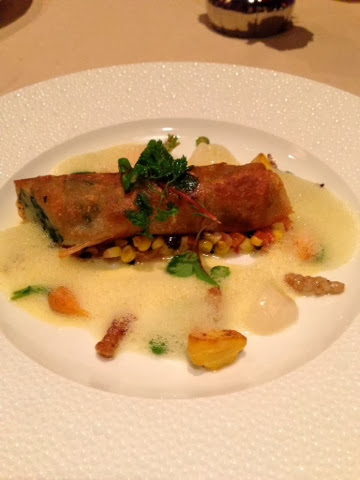 When our main dishes arrived, both were covered in silver tops. The servers lifted the lids off the plates at the same time and it made that metal "ting" noise. (Love my use of words?) Above is my main dish, a spinach cannoli. The foam around it was made from a sort of squash. The foam had a nice, subtle flavor. All the dishes were small amounts of food, aside from this one, but we were getting so full.
After all the food courses we were reaching the dessert platter. I had seen a table nearby receive this dish and I was looking forward to it. Eric and I both ordered the chocolate soufflé. Before they would bring this out, Don made us a pot of coffee at our table. The process, using the Cona Coffee Maker, was actually quite interesting. He said it was created for Queen Victoria. The water is heated below with the grounds in the upper chamber. The water steams, rises, and is brewed with the grounds above. But, as soon as the lower chamber is empty it becomes depleted of air and like a vacuum, sucks the coffee back down. I was amazed! 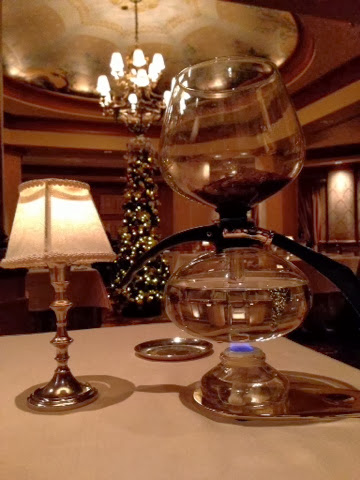 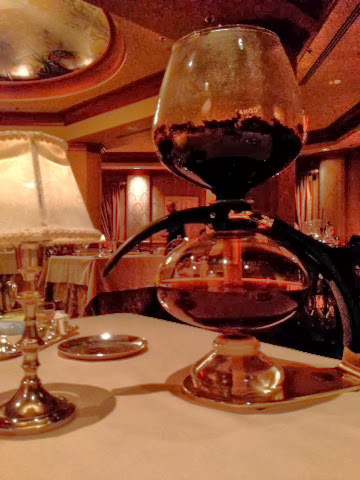 Here we now see the used grains in the upper level and in the bottom pot is the coffee, ready for enjoyment. And voila! Dessert was then served. I can still recall what it tastes like, heavenly. I want to mention that after the brewing process, the coffee was also very nice. 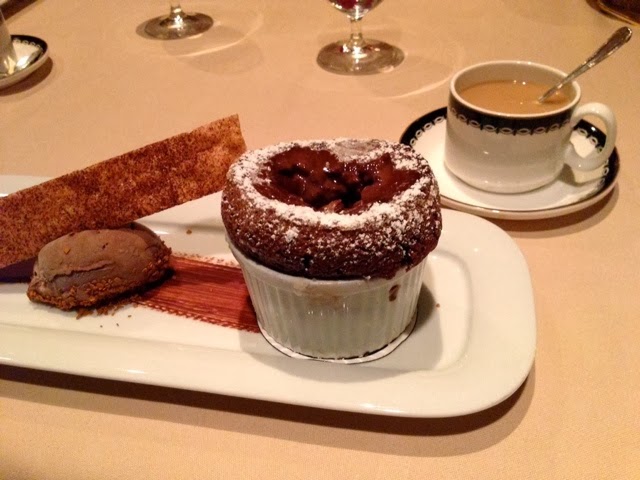 As one can imagine, Eric and I were so stuffed by now. We felt we couldn't have another bite. Well, Aaron brought out some candies that he said were made by their unique, in-house candy designer. We both figured it would be a while before we returned so we accepted them and went at it.
A few minutes later, Don returned with a special sized box for the candies. He said, "Well, most are too full to eat them by now, so I figured you'd want to take them home." For a moment we were slightly embarrassed. We kept the box anyway. 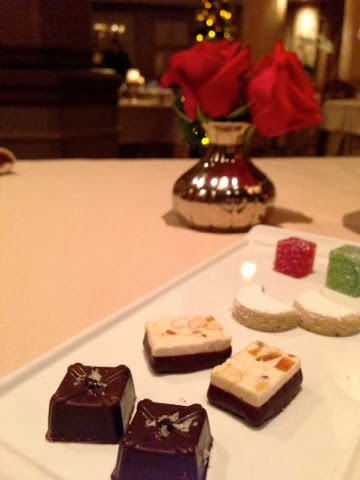 After taking care of the bill and gathering our things, Don showed us the restaurant's hidden Mickey. He said everyone misses it, unless it is pointed out to you in the carpet. Check it out, dead center. 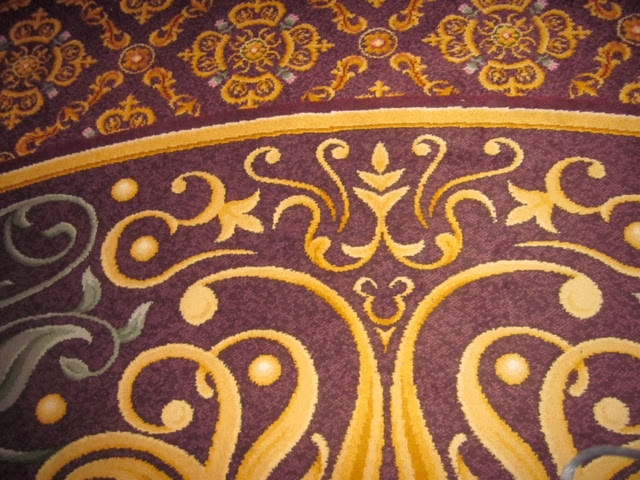 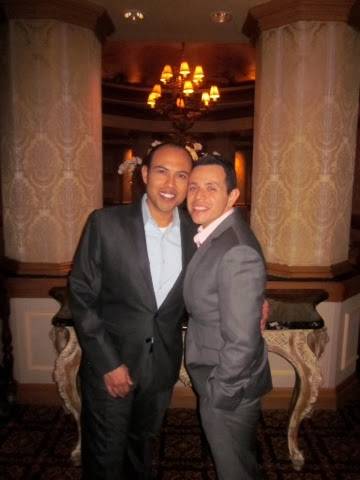 As I said, there were seven courses which included a lot of food. I'm not really a food blogger, but I hope you got a sense of what this is experience was like for us. The night was amazing and we lost track of time. Eric and I left the place at near 1 AM. As we headed out Don asked if we needed him to call a car for us. Where do they do that? I was impressed by that question.
And, I hope you all are impressed enough to try this place out for a special occasion of your own.  Remember to call ahead and be prepared to have a relaxing and pleasant evening.
Posted by Unknown at 8:01 AM No comments: