Since we've been together, 11 years, Eric and I keep saying we'll attend Comic Con. We finally made it happen this year. Because we went to WonderCon, we were included in notifications for "resale" tickets to Comic Con. Luckily members canceled and we took their spots on July 21st. 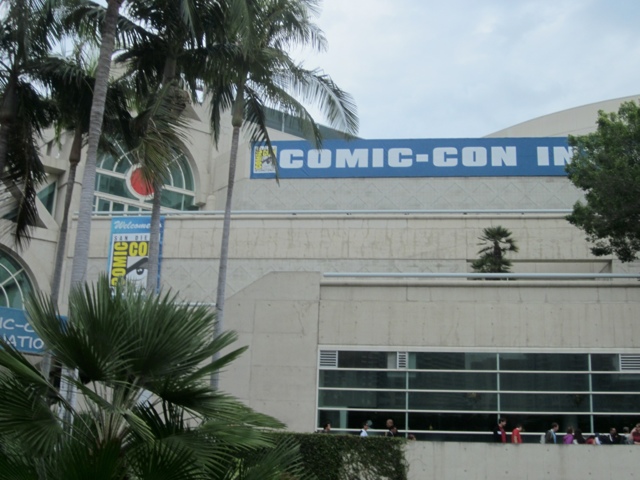 I was so nervous about parking. Once I saw that the prepaid parking had been sold out for months, I thought we'd shell out $30-$50 dollars to park. I had also read how congested the area can be. My pal Martin, who has worked the event, says it gets insane with jammed traffic. Martin suggested arriving by bus from his neighborhood, Hillcrest.
Another friend had mentioned the trolley. I looked into the trolley option and found a few Park & Ride locations with FREE parking. Phew!! We were set! After a 6:30 AM start to San Diego, we parked about 5 trolley stops from the convention. 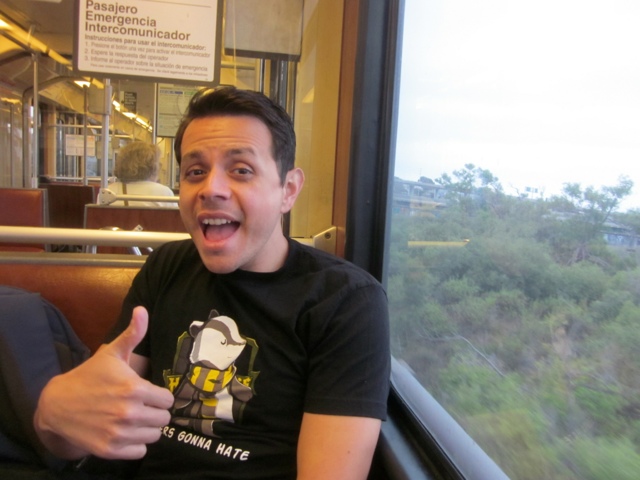 The trolley operates like any subway in NYC, so we had experience. It is $5 for a day pass plus $2 for the Trolley card. The trolley slowly filled up as we got closer to the Con. As this happened our excitement grew because the riders joining us had their event badges around their necks and free backpacks on. Here you can see the caped backpack I was given. 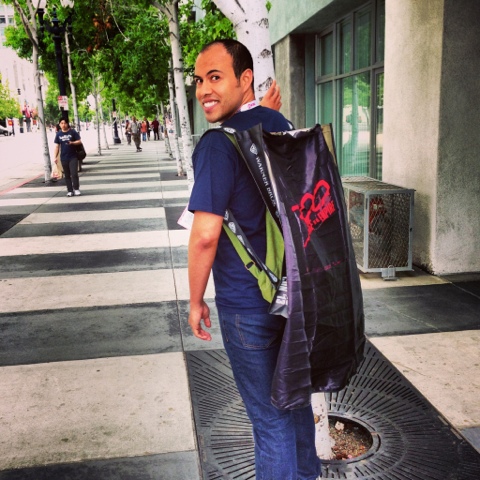 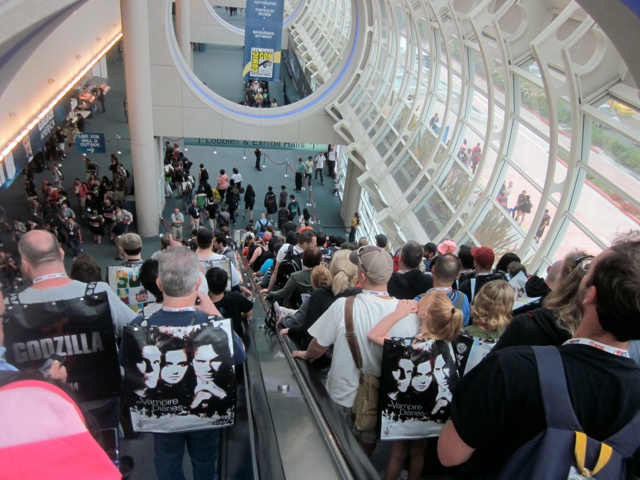 Approaching the center was really overwhelming. Eric and I kept repeating that we had no clue where to go. As it turned out, we were funneled into a quickly moving, but extremely long queue. This was to pick up our badges. The queue wrapped all the way to the rear of the convention building near the loading dock. We then were herded to the top level so that we could finally grab our badges (ticket).  Attendees must where his badge around the neck at all times. 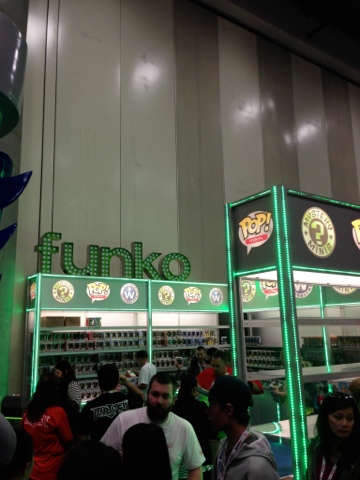 Although Eric is a bigger collector than me, we both are fans of Funko's Pop Vinyls. They would have exclusive vinyls for this even. The queue was full to capacity when we checked. It pretty much sucked that we couldn't even wait for the line to get shorter. The guy minding the queue was an ass. He was pretty much yelling into the open space to keep walking and not clog the walkway. That reminded me a lot of Disneyland during shows and parades. The only option Eric and I had was to keep checking back.
We did come across some set up themed to the series we watch, The Walking Dead. To check out their exhibit we had to get in a queue about 40 yards away. They then would take groups of ten to join the actual queue that existed alongside the exhibit. So confusing. 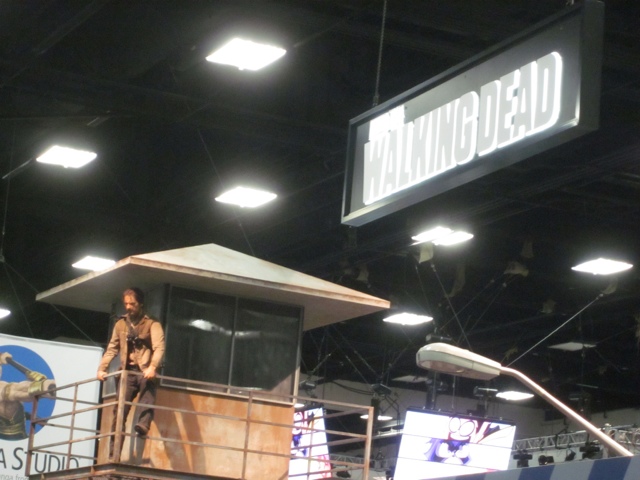 Once we made it back across to the main queue, holding a shoulder of a stranger to avoid the breaking up out group, we saw zombies! It was a photo op and that made us pretty excited. The show had an arch take place in a prison for an entire season. This was the perfect setting. And, there was also an opportunity to pose with zombie heads belonging to The Governor of Woodberry. 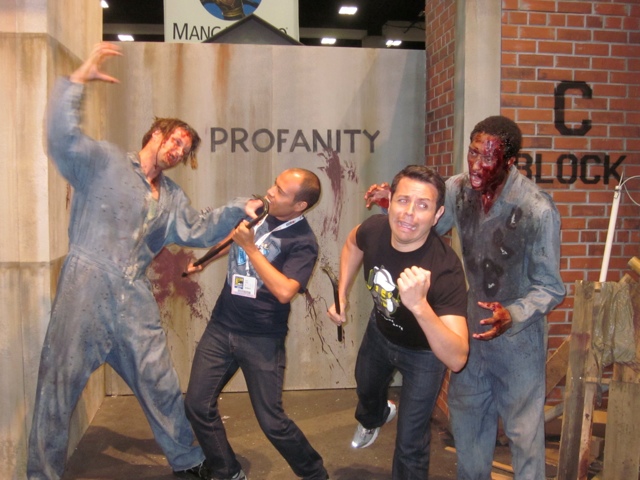 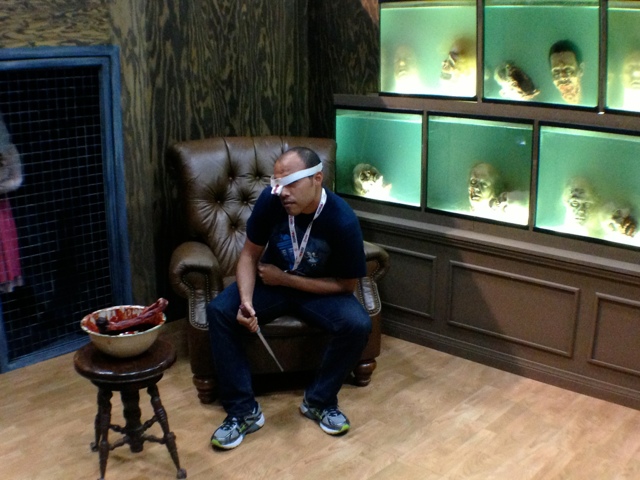 While still feeling overwhelmed, we pushed our way back to the Funko shop and found the queue was still closed. We then shuffled our feet back to the area near The Walking Dead set. Eric noticed the ABC booth. It was more of a pirate ship from the show Once Upon a Time 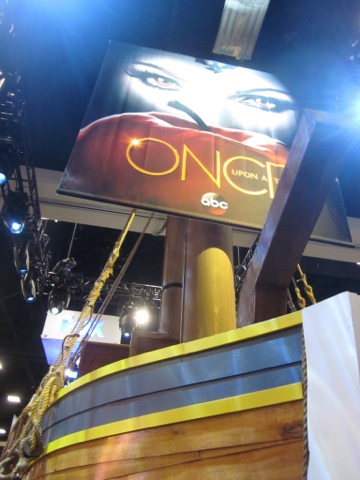 After waiting almost 30 minutes we met a few people dressed as the show's main characters. They had some cool costumes. We all were given a Comic Con exclusive pin and we watched a lengthy trailer. Eric snagged a photo with Prince Charming from Storybrooke. We can see Captain Hook peering out from the his ship. 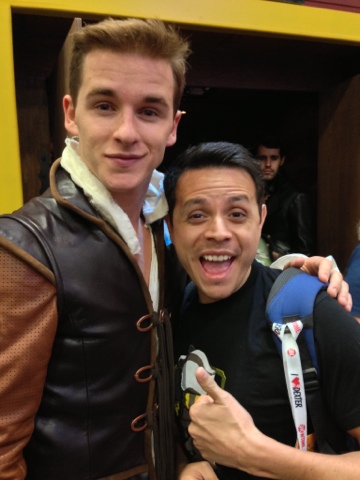 I keep talking about the hugeness of this convention. Just look at the filled walkways! It's insane! 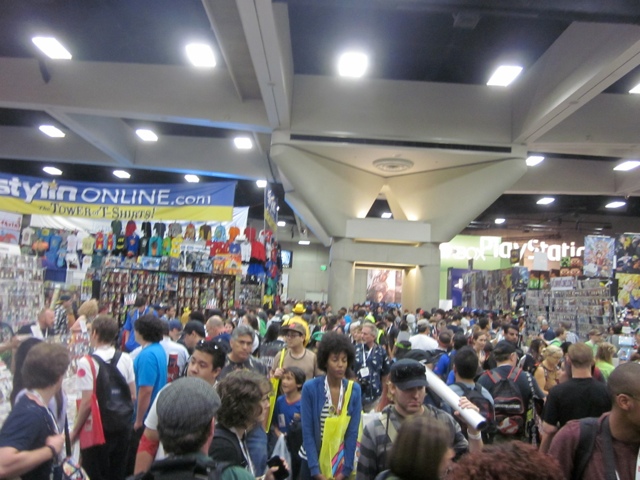 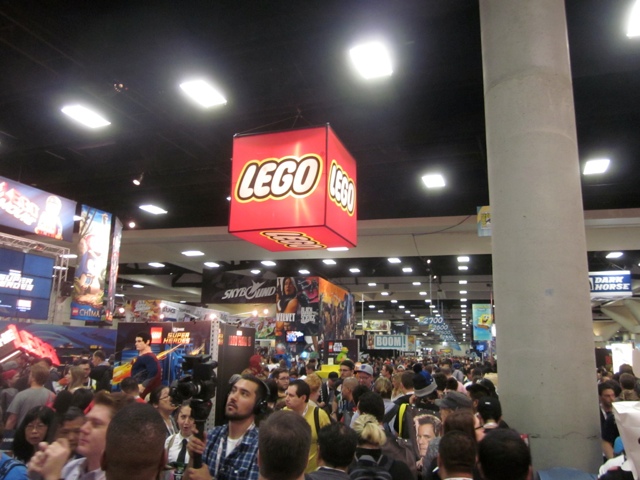 There's more to talk about, but I don't wanna tire all of your eyes. Please join Eric and I next time for the next installment of our SD Comic Con experience. Do we ever get inside that Funko booth? Do I finally get to meet John Barrowman of the show Doctor Who?.....find out soon.
Anyone else go? What was your experience? Leave a comment below :-)
Posted by Unknown at 10:43 PM No comments:

When it comes to interiors, I always seem to gravitate toward modern or  "clean lines". It was an easy choice to feature the era filled with Art Deco at my birthday party. Of course the feel of flappers and booze would also permeate the party. This idea was also sparked from the recent release of The Great Gatsby. The lavish parties thrown by the hermit of a character gave me some strong inspiration. I could have stuck with the dark, underground feel of a 1920s Speakeasy, but I wanted a more lively feel. I immediately wanted to feature the colors of Silver, Black, with a touch of Gold. 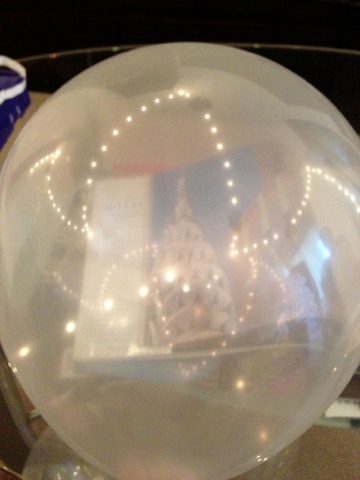 Eric contributed quite a bit to the party's look. Brainstorming began in mid June for our July 13th party date. It was decided early on that we had to have our guests dress the part. Although we'd provide a vintage backdrop, our friends would give it life.
Eric and I gave hard thought to bring in unique details our guests wouldn't forget. I had hoped people would get the sense that others lived in this party setting, that they had time traveled. We looked online for vintage portraits to occupy our frames on the shelving and walls. I'll even give it away that these temporary photo frames were purchased at the Dollar Tree. 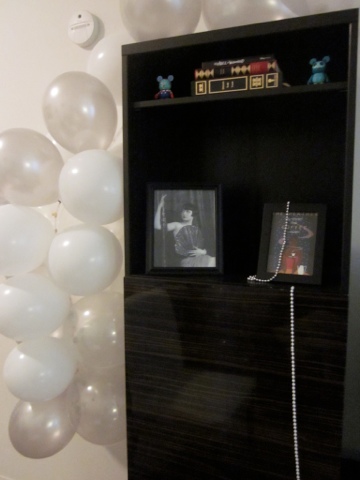 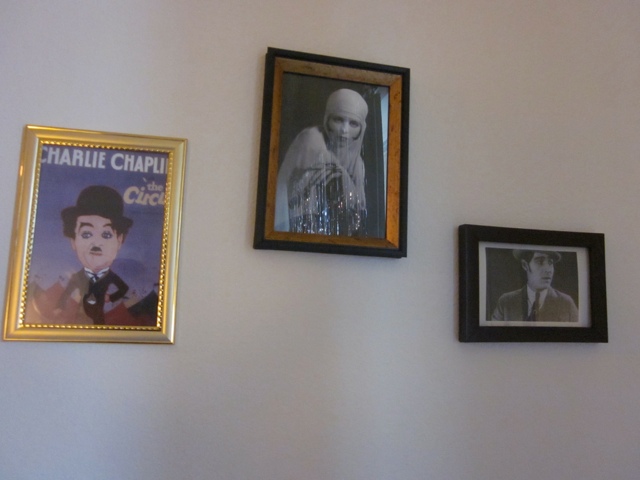 The den was sectioned off from the main living space with a silvery curtain. I had hoped the curtain would do a great job at catching the light. It did just that. Within the den I strived for a lounge with darker lighting. Sticking to the times, the den had a different 1920s track playing. It was a small change from the main area 1920s music that people may not have consciously noticed. The details are key. Eric and our friend Ricky certainly enjoyed the lounge area. 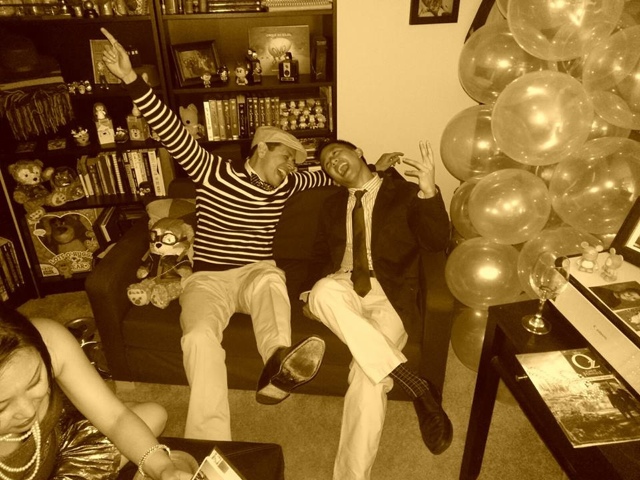 For beverages we stuck mostly to wines and vodka based concoctions. One of my birthday gifts was the ingredients to a favorite drink of mine, a Manhattan. 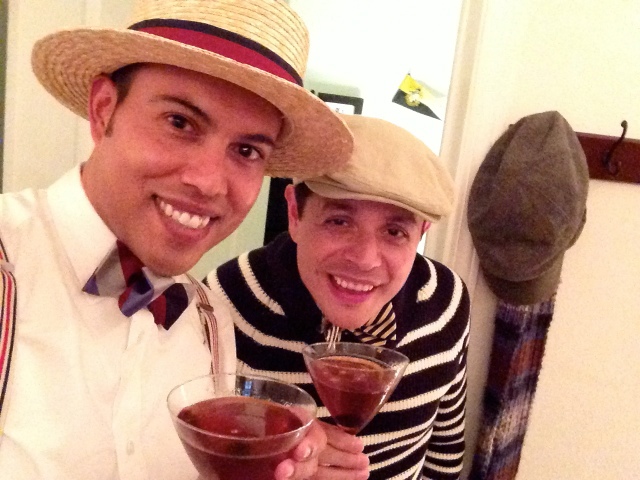 Our friends really put thought into their outfits. I know some of them were nervous they wouldn't get the looks quite right, but everyone did a good job. I'm glad all had fun getting creative for their attire. 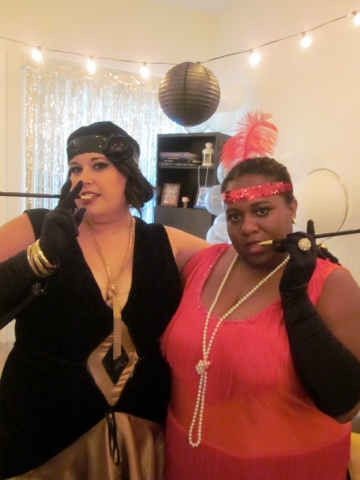 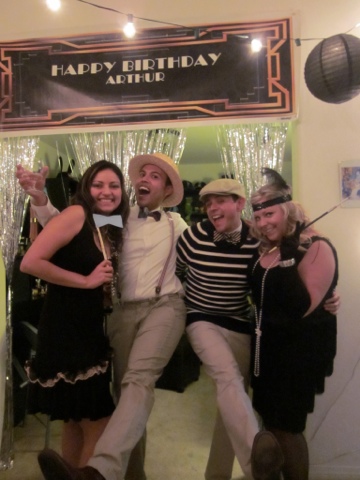 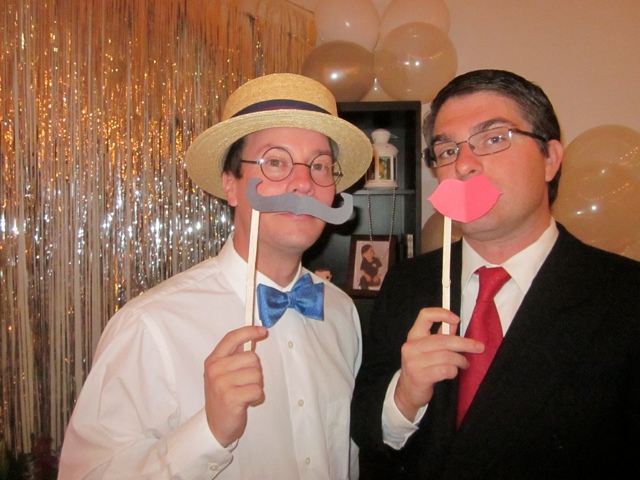 We even made the restroom appear a flapper lived there. She left a mess as you all can see. (I ended up in the pic. I wasn't sly enough)

It was a roaring time! All seemed impressed with the party's look/decor. If we had a bigger place and budget, who knows what we would've done!! 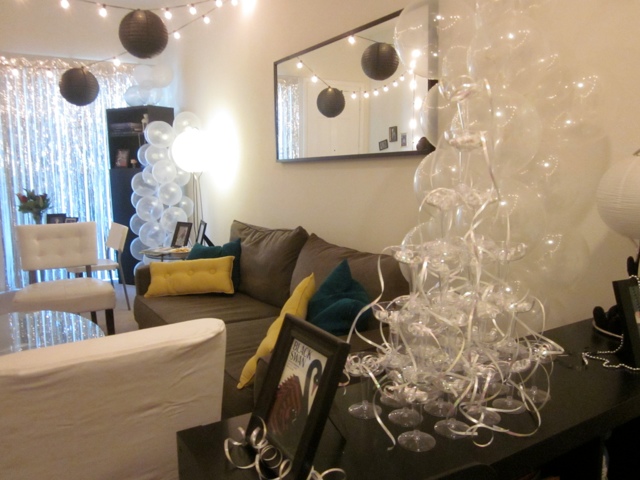 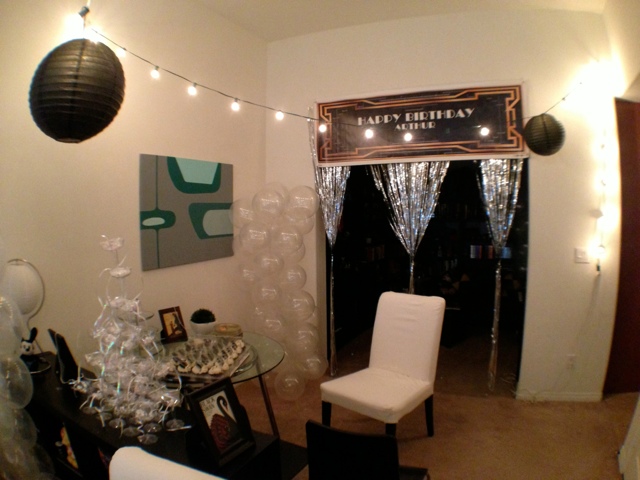