Looks as though the new Cirque album is available for the show Amaluna! I'm about go preview it at the link above. They let you hear the whole album.
The show celebrates the female presence/Mother Earth persona. What I have seen so far looks very different to other shows, but in a good way. I don't see anything on the schedule for the CA area yet. I hope the show makes its way here because as I have said in other posts, Eric and I enjoy a Cirque show in a tent!
Posted by Unknown at 8:52 AM No comments:

Is it a Dragon or a Lion?

The famous French Canadian circus troupe, Cirque du Soleil, passed though our area over the weekend. This particular production is called Dralion. It is a fusion of Asian and European cultures. The show first came to California in 1999 and made a stop in Irvine. When I saw the show in '99 it was performed under a signature Cirque du Soleil tent. At the present, Dralion is shown in an arena setting, which I'm against. I'd rather see their shows under the circus tent. It's more intimate, but this still won't keep me from wanting see a show.

I will say that both Eric and I had a change of opinion for this show. Dralion actually played out just fine in the Long Beach arena. Unlike the Cirque show Quidam, this show didn't have an arching track above the stage to obstruct views of spectators in higher seats. Our seats were a decent distance and we saw everything, including the performer's facial expressions. I know I'm dwelling on the venue choice, but Quidam really didn't play well here. Eric also made a good point that the color scheme for Quidam doesn't reach the viewer as well as the vibrant colors of Dralion. Quidam is a much darker show with many grey and blue hues.

There isn't really a story to this show and that is just fine with me. The themes brought forth are of the four elements of the Earth. Characters personify the elements through use of color and choreography. At one point the avatars of Water and Fire have a brief, but hostile dance with one another. I might have chosen Silver to represent "Air", but I am sure the color chosen, Green, is seen better onstage.

Although not all the acts were present in this re-staging of the show, I liked it. It gives someone a reason to see the show for a second time. There were four acts that weren't in the original creation. Those acts were Trampoline, Diabolos, Aerial Hoop, and an all new apparatus called Cross Wheel. These four acts in the show really injected new energy into the 13 year old production. Luckily the music hasn't changed. It has high energy containing Spanish and Italian lyrics. As usual, there are also lyrics in the "Cirquish" language. This language is used to evoke a feeling and not put so much focus on paying attention to the song lyrics. The music is there to act as a backdrop and emotional guide of the acts.

It has to be mentioned that the clown acts fell flat. I don't know what the company was thinking by approving these four or five interludes of "comedy". These four clowns even managed to wreck a section where the clowns are mimicking the whole show. They have "make shift" costumes and attempt to repeat the grand feats of strength, but comically fail. The original clowns had great timing with this.  These new clowns seemed to be going through the motions. I guess we all have our days where we just want to be off from work. 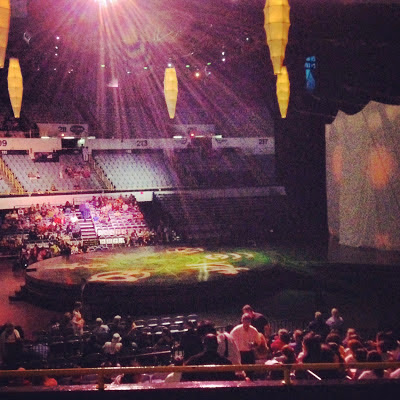 I really wanted to get some shots during the show, but this is of course prohibited. I do believe that these performers give so much of themselves and deserve to be paid for what we see them do. Deep down......I still wish I had snuck a few shots. The only one I took was of the stage prior to the start of the show. Unfortunately it doesn't show the impressive structure that towers at the back end.

I'll always be a fan of Cirque, even with not so great clowning. I don't think a traveling production is due to pass through any time soon. We do hope to see Iris again with its newer length of just 90 minutes. I will definitely report on Cirque again when we see it. Remember to support the arts in whatever form you choose.
Posted by Unknown at 3:24 PM No comments:

Free Candy to Scares in the Streets!

It was that time of year again when we all needed to avoid the demons that are roaming the earth! To avoid the spirits we dress like goblins, ghosts, witches, Hogwarts students, Doctors without names, or cheap prostitutes (but claim to be bunnies)!! But seriously all, Halloween is up there with Christmas as my favorite holiday. Who doesn't have great memories of running door to door and asking for candy? I have a lot of memories of dressing up the outside of our home with lighting and scary vignettes for the Trick-o-Treaters. Then as an adult, Eric and I use to haunt the yard with strobe lights, gravestones, and many pumpkins. This year our friend Natalie had us over to hangout and pass out candy. We had a great time.

She lives in an area with older houses that have a lot of character to them. These houses all have cool porches, huge trees, balconies, and 1940s styles. The residents use this aesthetic to their advantages for Halloween. To prep for the night we decorated the front of Natalie's place. We were told by the resident next door that close to 500 kids come around!


Natalie also invited Kristen, another friend, and they had an early start on trying to get the house up to par for the night's festivities. Eric and I arrived with candy in our bags, and a few items to add to the yard. As mentioned earlier, Eric and I have a history of haunting a yard, so the two of us quickly got to work. The sun was setting quick and the kids would be coming soon! We even had three groups show up as we were setting out the decorations. The fact that the kids were already out gave us a hint of what was to come.

Once the sun went down the kids came in huge groups. There were a few instances we had a queue going to the sidewalk. At that point a little girl, around 4 years, decided she had a pass to the front of the line. She made a "bee-line" to Kristen and opened up her sack. She was ready for that chocolate. We all laughed so hard! It really was a fun time as we gave out the candy to all the "free loading kids" ;-)

About 2.5 hours later we were clean out of candy! (Of course we popped a few wrappings of chocolate into our tummies as well) We wanted to take a little walk and see what else was going on around the neighborhood. As we set out we were met with crowds of kids clogging up the sidewalk. For a brief period our little group was at a stand still. There was even a house that set up a haunted maze. Being a Halloween enthusiast I wanted to go in, but the queue went clear down the street. I took a photo of the maze's facade, but it wasn't a great shot. I did get a photo of a house that was also decked out for the holiday. At this time of the night, they were also out of candy, but were still scaring pedestrians. The father there said he gave out just over a thousand pieces of candy!! 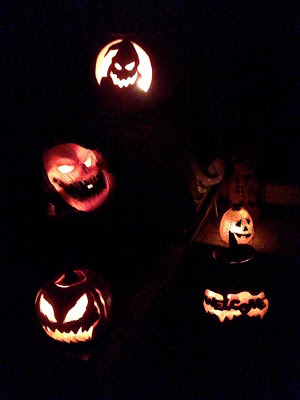 Again, we had such fun that we hope to do this again. It sure is tough when Halloween falls on a weekday because it makes you feel a little "short changed" that work is early the next day. When I am a few years older, Halloween will be on a Friday in the year 2015. (all photos courtesy of my iPhone 5)
Posted by Unknown at 1:19 AM No comments: