Less Than 50 Days to Japan!

The time to fly is drawing near and I already know what I'm wearing to Tokyo Disneyland! I don't want to make it sound as though we leave in a few days. We still have six weeks. But, it's now a great deal closer than the last time I wrote about our up coming trip!

Just within the last week Eric and I have plotted out which regions of Tokyo we will see per day. To sum up the itinerary:
We arrive/land Monday evening and head to our first apartment. Travel one train stop to Disneyland and DisneySea for the next four days (most people I know had lengthy train rides to the parks). We'll then switch apartments to Shibuya on Saturday, and see the Robot Dinner Show that night in Shinjuku. Sunday morning we'll check out Japanese cosplay in Harajuku plus surrounding area. Early Monday, travel to Kyoto via bullet train to spend a day there looking at shrines and the old city. Then Tuesday through early Thursday, see more of what Tokyo has to offer. That Wednesday we will have our Ghibli Museum visit as well. We had hoped to break up the Disney Parks days, but the multi-day tickets must be used consecutively. And, we can only park hop the last two days.

Eric and I are not at all worried about running out of activities. Although we initially thought our length of stay was good enough, it seems like we definitely will need to go back! I don't think I've been this far out from an up coming trip and already thinking about when we can go back! There have been suggestions to visit Universal Studios in Osaka as well, but we can't justify that when there's plenty to see in Tokyo.
We did hit a slight snag, but I think we have a solution. We purchased our Tokyo Disneyland resort four day pass. As it turns out the printing process would prefer us to use "A4" paper. Using our standard size, a small portion would print on a second page. The point of why this is an issue is this: The resort wants the barcode on the ticket to be read properly by fast pass machines. Unlike the US parks, they don't exchange your e-ticket for an actual ticket stub. It being the USA, we don't use "A4" paper here. My friend in England was astounded that i'd never heard of it. What can I say? I'm a pompous American! Luckily they had examples on their site as to the preferred image and sizing of the bar code, so we'll be fine. Here's a screen grab from YouTube of some lady's ticket. Thanks for the image lady. 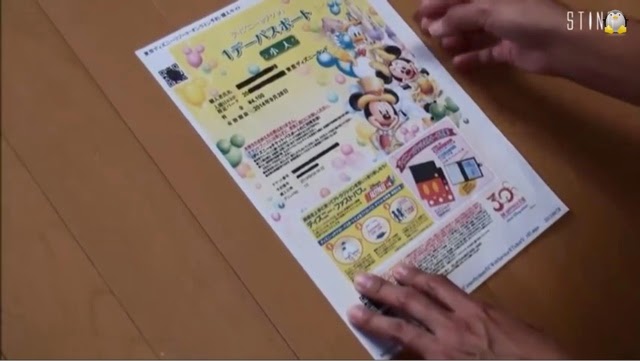 Something to keep in mind if you plan a trip to Japan is the Japan Rail Pass. It is only sold outside of Japan. Many people give rave reviews regarding this, but you have to make sure it works for you. Eric and I have read that it is worth it even if you only use the bullet train for one round trip. It can also be used within Tokyo, but only used on assigned trains/rails. One negative for us is that although it's active for seven days, we won't actually need it until we have less than seven days left on our trip. There isn't a "JR Pass Activation" office near our first apartment in Edogawa and we won't have a need for it until we leave to Shibuya.
We also have the option to pay as we ride by purchasing a train card (Suica or Pasmo). A traveller can load up those cards with money and it gets deducted with each use. There is also the option to buy a ticket each time. Of course, the cost will change depending on the distance travelled. The JR Pass seems like the best value. But, it still bothers me that even though we'll pay for that unused time, we won't activate it or have use for it until Saturday.
It should be mentioned that there are a few tour sites, such as Japanican.com and sunrisetours.com , that have ways for travelers to get outside of Tokyo. We even used Japanican to buy the Robot Dinner Show tickets at a discount. I'd say the most confusing part of this trip planning has been all the options available to you.
We have found some help on YouTube. I'm glad that's been around because there isn't a lot to read online. What I have found online (Blogs) are mere recounts of trips, which is fine, but I want content with real tips/issues. I hope this helps possible "trip planners" to Japan avoid some problems or with decision making. I couldn't find anyone with Tokyo Disney ticket experience either. I only found one video that showed a lady fold her e-ticket for fast pass use. Eric and I still have more plans to solidify and I look forward to getting that done. Although it sounds confusing at times, it's been fun so far.
Posted by Unknown at 6:02 AM No comments: