Seeking the Wild at Animal Kingdom 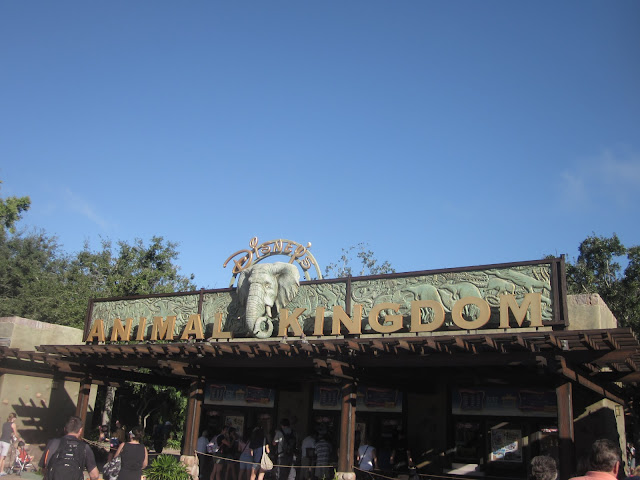 Since we had a few first timers to the resort, and one who works at the San Diego Safari Park, we tried to WOW our friends at Animal Kingdom. With our shorter than normal stay at Disney World we knew what offerings to skip. The 10 Miler run we'd soon be apart of the following night also dictated a shorter stay at this park. So, if you visit Animal Kingdom park on a short trip, maybe the type of day we had is for you.

It is said that the Safari attraction should always be visited early on in one's day. Eric and I steered our group left, toward the Safari. The eight of us made short stops along the way. A group, couple, or single person shouldn't be able to resist the views one comes across at this park.


If you're into photography, there are opportunities all around. Right at the start its easy to get side tracked taking group photos with the Tree of Life as your backdrop. Now when I say "side tracked", I don't mean that in a negative way at all. I can't stress how easy it is to suddenly become engrossed in the atmosphere. The enveloping theme draws you into a convincing, jungle-like world.

After moving through the plants and crossing a bridge, we all arrived in the park's section of Harambe. This area themed to a fictitious market place in Africa is the corridor leading us to the Kilamanjaro Safari. If you can resist the shops and various treats, you'll end up at the "upside down" tree. That tree marks the queue entrance and our journey to a jungle, savannah, and the mud pits.

Eric and I have ridden this tour many times and we usually have a different experience. The sequence of animals seen remains the same, but sometimes we see Lions and others trips we don't. This time I wanted all hands on deck because Kevin knows about Safari set ups like this, and so does his girlfriend Angie. Kevin and Angie would be the travelers to impress. Kevin works at the Safari Park in San Diego County and Angie has been there many times.


Giving a complete play by play of what animals we saw would fill up this whole blog entry. I will say I had hoped to see a lot more during this Safari. If I recall correctly, Kevin and I did joke a little with an abridged Jurassic Park quote "Uh, you do have animals in your Animal Kingdom safari park, yes?" I hope our first timers, that also included Rey and Brandi, still had an enjoyable time while riding. Karla had visited before, but that was Fall of 2004. 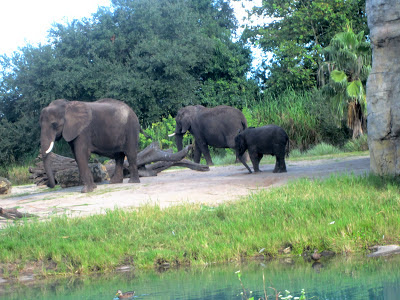 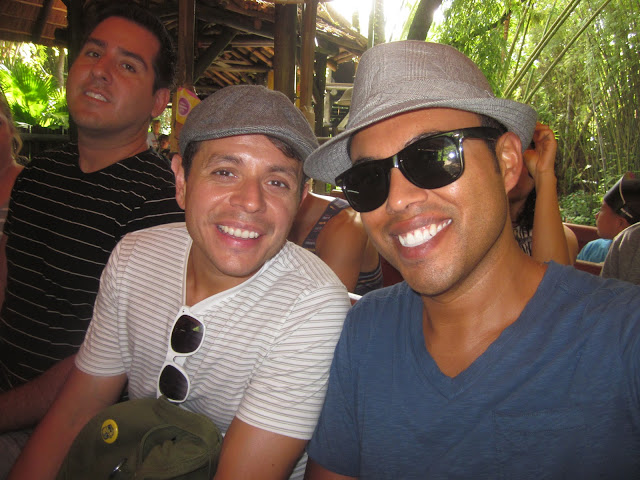 Although the bumpy jeep ride through the safari is the main draw, Animal Kingdom has other attractions to offer. And, if you only have one day your group might leave not seeing key experiences. Sure "ignorance is bliss" but missing out on the unknown is a shame.

One of Eric's "not to be missed" items are both Pangani Trail (gorillas) and Maharaja Jungle Trek (tigers and bats). Both trails are lengthy but benches are provided as rest stops. More importantly, those benches being cooled by huge fans are there to take in this great environment. The trails themselves are in unique settings of an old palace and ancient ruins.

It was so fun to watch our friends try to find all the birds in the park's aviary section of the Jungle Trek. One of the Cast Members helped out Brandi as she tried to find a gold tailed bird. She found him in the end. But then the Cast Member spoke on and on about the bird's characteristics. Don't get me wrong. She was very informative, but our group was already in the next exhibit while Brandi and I patiently listened. 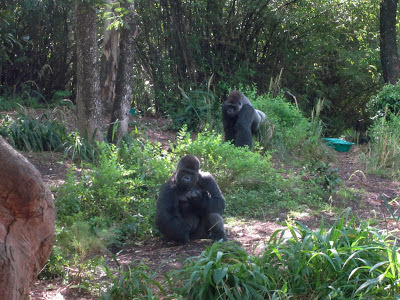 A key moment in the Pangani Trail is the grand finale of seeing gorillas in a good sized habitat. This gorilla habitat is a sight to behold as it surrounds the visitor on both sides of the trail. Some guests storm right through and others take a seat and just watch the gorillas for a chunk of time. It's certainly quite relaxing as you hear waterfalls cascading down the hills. I'm agreeing with Eric that these trails are "a must" when visiting this park. 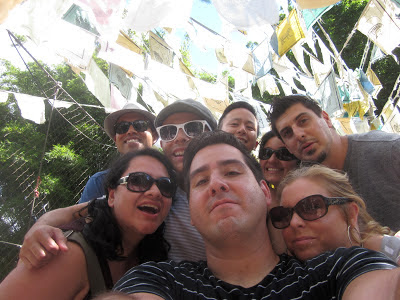 The thrills of seeing giraffes and gorillas don't compare to the sensation of careening through a coaster track. If you don't know, this is where Disney erected Expedition Everest. The mountain themed after the Himalayas sits in Animal Kingdom's Asia section. As our group moved through the humidity and passed under authentically hung flags, we felt as though we were in Nepal. Every few minutes one can see the coaster's train climb high up the side of the mountain.

Whether one uses fast pass or not, the queue is usually not bad. I think the most Eric and I have waited is 30 minutes. That wait time was in the "off season" 6 years ago, when the attraction first opened. I would hate for someone to miss this great attraction because they felt the wait was too long. Of course with the new Fast Pass+ you'll be able to schedule your ride times before leaving home. That could definitely change the way folks maneuver the park.

Not to single out Rey but we were a little interested to see his reaction. I hear coasters/heights are not his favorite encounters. He is a trooper though and boarded with the rest of us. With that said, Rey loved it and so did everyone else in our group. There are a few surprises that I won't spoil for others that have yet to ride. The adrenaline sure gave everyone a perk to trudge along through the humid filled day.


If you're wondering about food, there is a good assortment from which to choose. During our time at the park we did take a few rests and used our Disney Dining Plan snack credits. Eric found this huge cupcake that he was not able to finish. I ordered too soon and picked out a regular cheese Danish. I wish I had chosen a cupcake similar to Eric. One should get the most out of the Dining Plan. 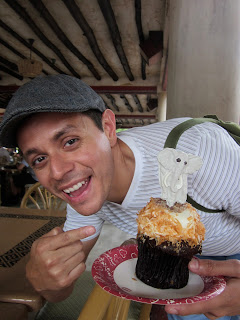 As we relaxed in the humid shade we were able to talk about our action plan for the 10 mile run. The Twilight Zone 10 Miler was the next night, but we had to pick up race packets. Having to do this made our Animal Kingdom day a little shorter. The packets were only given out until a certain time. Also, half of our group that hadn't yet seen the Cirque du Soleil show La Nouba were going to check out available tickets. After cementing our plan for that, Angie, Karla, and I danced to some African beats!

We heard Dinosaur, a turbulent ride a prehistoric time, was not running at the moment so we headed to the rapids. Eric and I normally skip this attraction because compared to Grizzly River Run at California Adventure, this ride is sub-par. But, I'm not exaggerating when I say it was sickly hot and humid!

Kali River Rapids is located in the Asia section and has great theming. The "thrill" factor is low, but it can still be fun. The queue consists of a few shrines and abandoned shops that give the feeling one is in India. The actual attraction experience has an environmental conscience message about deforestation. There's a strong image of a burning forest while lumber is hauled away. Our group left the attraction with a decent amount of water splashes. It sure felt great with the weather!

Our six hours in the park was passing by us quite quickly. Although we had our snack, the heat was bringing on hunger faster than we thought. Some great places to eat at this park are PizzaFari, Yak and Yeti, and the place we chose this day, Flame Tree BBQ.

The great traits about the Flame Tree BBQ are the food portions and the seating area provided. Right behind the kitchen building and along the water are many tables. As Eric and I have done in the past, our group grabbed a table with a great view of Expedition Everest. I have to add that it's also a quiet area to rest from the day's walking. 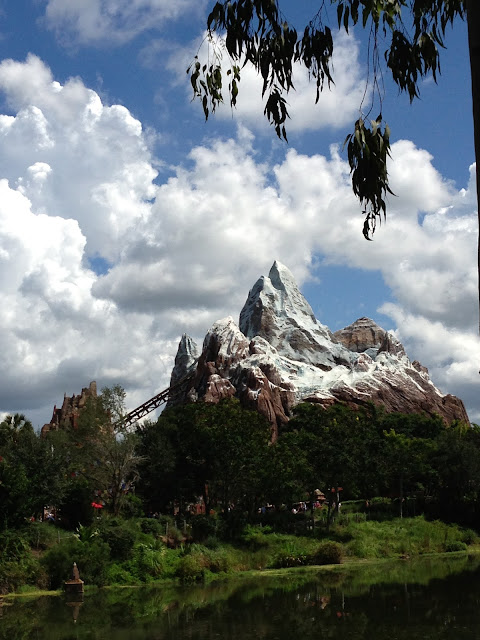 After lunch we found ourselves in the 2 o'clock hour. It was close to our departure from the park. Even though Angie is terrified of Dinosaurs, she decided to tough it out on the attraction of the same name. We checked our wait time app and saw that it was open with a 15-20 minutes wait (a typical length).

Eric and I always get so excited to get people on this attraction for the first time. I know when I had my first trip, I didn't expect what Dinosaur had to offer. Unfortunately the attraction broke down as we neared the front of the queue. After waiting it out a bit, the Cast Members cleared the building of all guests. I'm pretty sure Angie was relieved, but Eric and I were disappointed. We weren't sure when our friends would return so we hoped they would get the experience.

As we headed toward the main entrance, Ricky and Eric made a few last attempts to trade some pins. It's also usually the time when one asks himself, "Did I get a photo of The Tree of Life?" So a few pictures were taken of the tree as we headed out. 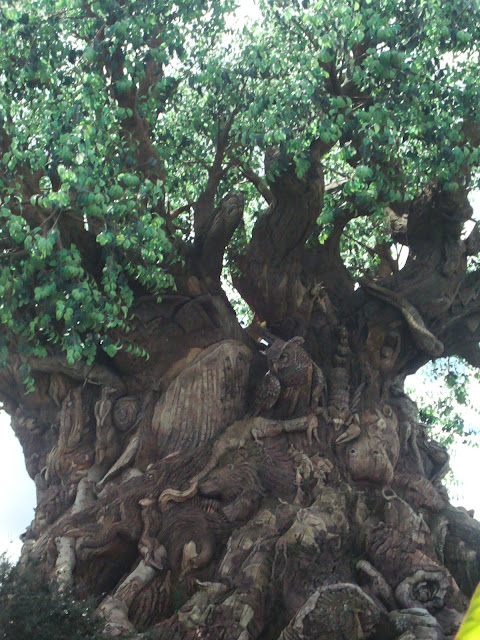 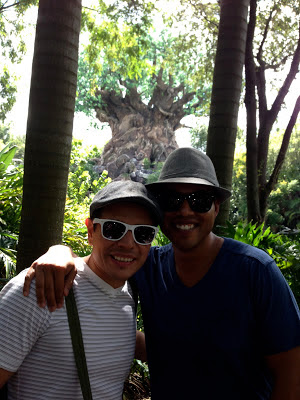 Ricky, Angie, Eric, and myself still had the packet pick up and RunDisney Expo at Disney's Wide World of Sports complex. Also, since Kevin, Rey, Angie, and Brandi were heading to Cirque. The rest of us would continue alcohol tasting at Epcot. So you see, although not all attractions were ridden, you can still get a full day here. There is nothing worse than trying to cram everything in your day. It can sometimes be too hot and exhausting for that. Your friends, partner, or family are with you, and that's the important part. It's also okay to split up and regroup.
Posted by Unknown at 10:57 AM No comments: